Red Bull drops promising Scot for this weekend’s FR3.5 races in the Nurburgring after a difficult start to the season, something I say is a bad move from Helmut Marko…

Red Bull has dropped Lewis Williamson from its Junior Team driver scheme and replaced him with Antonio Felix Da Costa, ahead of this weekend’s fourth round of the Formula Renault 3.5 Series at the Nurburgring.

Scotland’s Williamson formally joined the Junior Team at the start of the year, having recieved backing from the energy drink backing last year as he impressed on his way to eighth in the GP3 Series mixing it with seasoned Formula 3 racers like Valtteri Bottas and Alexander Sims in his very first year out of Formula Renault UK.

He joined the newly-founded Arden Caterham team for his first full season in FR3.5, having replaced Daniel Ricciardo in a couple of rounds in 2011. In an ultra-competitive season, Williamson has struggled for pace and results during the opening five races of the season and is yet to score a point.

In his place comes Portugal’s Felix Da Costa, who is highly-talented himself, having tied with Jean-Eric Vergne for second place in the Eurocup Formula Renault in 2009. Despite having spent a year in the F3 Euro Series, Felix Da Costa struggled for results in GP3 and only came 13th overall after a win in the season finale.

One of a number of drivers who had hoped to graduate to GP2 for 2012 but lacked the finances to afford a seat in the ultra-expensive feeder series. He had to resort to a second season in GP3, where he was expected to be one of the main rivals for overwhelming pre-season favourite Mitch Evans. His season began well with pole in Barcelona, but he jumped the start. He lies ninth in the standings after six races.

I am delighted for Felix Da Costa, a talented young driver who struggles for funding.

But dropping Williamson in favour of him is another case of Red Bull talent chief Helmut Marko making a hasty, bad decision.

This is the same man who dropped Jaime Alguersuari and Sebastien Buemi from Toro Rosso because they hadn’t yet shown that they could win a race – in a Toro Rosso!

Yes, Williamson has massively underperformed so far this season. But you only need to take a look across the same Arden Caterham garage to see that it might not be entirely his fault. Having finished third overall last year in his rookie year, Alexander Rossi should be in contention for the FR3.5 title this year. But so far he is only eighth overall. The reason? He has struggled for pace at Arden Caterham. The team were clearly majorly underprepared for the start of the season and are still playing catch up.

Very few drivers do well in every type of car they ever drive. The fact that Williamson is struggling in FR3.5 is not a fair representation of his talent. True representations are his performances in Formula Renault UK and GP3, the fact that he won the McLaren Autosport BRDC Award in 2010 and the fact he is a member of the FIA Institute Young Driver Academy this year.

Marko has previous when it comes to judging drivers on their performances in one type of car. Brendon Hartley had impressed in Formula Renault 2.0 and then British F3, but struggled in FR3.5 and was subsequently dropped in 2010 having been outperformed by the less experienced Daniel Ricciardo. Hartley showed when he was handed a chance in GP2 at the end of last year that he is a very good driver, in the right machinery. With little funding post-Red Bull, he’s had to turn his back on F1 and look to a future in sportscars instead.

Furthermore, Williamson has been dropped after just five races this season. What’s to say he couldn’t have turned his form around once he and the team become more comfortable with the car?

Indeed, at the last race at Spa Williamson qualified fifth on the grid for the second race in wet conditions. Surely that is a sign that the guy is a mega driver, but that in dry conditions his and his team’s struggles with the car are reflected in their results. He was running amongst the leaders before a safety car and then red flag came out before he had made his mandatory pitstop.

Like Williamson, Felix Da Costa is a massively-talented driver. But like Williamson was, he’s been struggling to turn his talent into results. Is making this change going to make any difference at all? I doubt it. I hope for Felix Da Costa’s sake that I’m wrong and he can perform well despite having no time in the car. 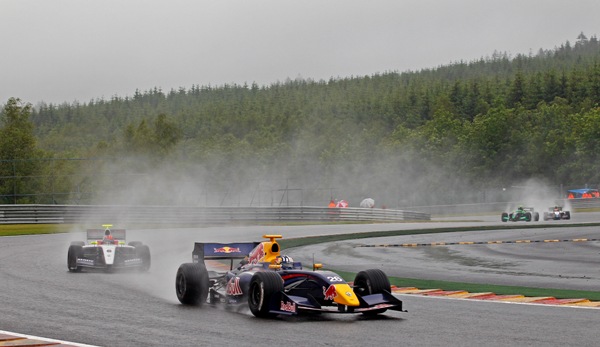 As for Williamson, I fear a lack of funds may derail his career. Even returning to GP3 could be too much to ask. I hope that maybe McLaren could pick him up – the rewards for anyone who does could be huge. But at 22 years old he doesn’t have time on his side.

I’m not just making these points out of sympathy with Williamson as a fellow Brit. I’m questionning the tactics of Marko in trying to channel the best talents into F1 with Red Bull. Dropping a driver because he’s failed to get a decent result in five races for reasons potentially out of his hands is lacking in logic.

Red Bull ended their statement by saying “it is a brutally competitive process”. It certainly is with Marko in charge.