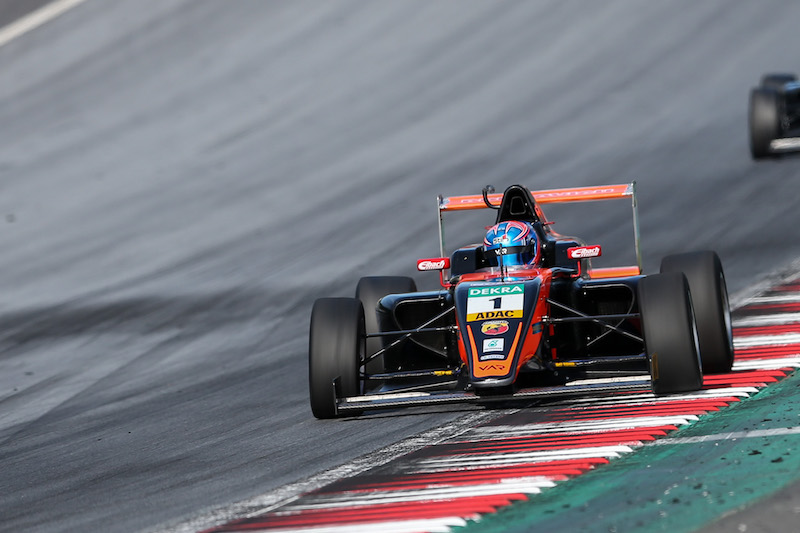 Felipe Drugovich claimed his second win of the ADAC Formula 4 season in race two at the Red Bull Ring, a result that moves him to the top of the standings.

Race one winner Marcus Armstrong led away from pole, but Jonathan Aberdein edged ahead of the Ferrari junior as they approached the braking zone for Turn 2.

Armstrong braked later to try and keep hold of the place, but in doing so forced both of them deep and off track – an incident not unlike that between Nico Rosberg and Lewis Hamilton in last year’s Austrian Grand Prix, except without the contact.

Drugovich capitalised to pass both of them, and built up a 1.8-second lead over Armstrong when the safety car came out five minutes into the 30-minute race after Andreas Estner crashed at Turn 2: thankfully not collecting anybody as he slid across the track having been forced onto the grass by Louis Gachot.

The restart lasted less than a lap before the safety car was back out after a dreadful couple of corners for Motopark.

First, Leonard Hoogenboom was mounted at Turn 2 by Job van Uitiert, removing his rear wing, and David Malukas and Charles Weerts then sandwiched privateer Laurin Heinrich on the exit of Turn 3.

Malukas bounced over the front of Heinrich’s car, breaking his suspension and requiring his car to be recovered, while Weerts was forced to take a detour through the gravel trap.

There were 14 minutes left at the restart, with Drugovich initially?able to break clear as Juan Manuel Correa took second away from his Prema team-mate Armstrong.

Correa then kept within a second of Drugovich for the next 10 minutes, before he and Armstrong went side-by-side once more, with Correa keeping?the place and Armstrong left to defend third from Aberdein.

The result puts him top of the standings, level on points but with one more win than Juri Vips, who finished fifth behind Correa, Armstrong and Aberdein.

Michael Waldherr lost out to Vips and Kami Laliberte at the first restart, but later re-passed the Canadian to take sixth.

Nicklas Nielsen took the first restart in third place but gradually slipped back to eighth, only just beating his US Racing team-mates Fabio Scherer?and Julian Hanses.