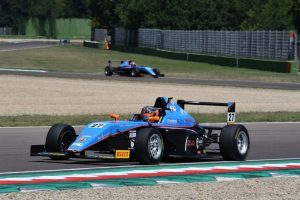 The Jenzer Motorsport driver managed two safety car restarts on his way to victory on his 61st start, holding onto the lead despite pressure from championship contender Enzo Fittipaldi.

Fittipaldi spent most of the race hounding Malvestiti. The Prema driver was never close enough to make a move, but in the best position to take advantage if Malvestiti was to make a mistake.

After a late safety car, brought out after Ian Rodriguez and Ido Cohen collided in the final 10 minutes, Fittipaldi drew close enough to make a move on the race leader. Fittipaldi tried on either side to find a way through, but Malvestiti stayed firm on his way to the chequered flag, finishing 0.362 seconds ahead.

Behind them, the Bhaitech duo of Leonardo Lorandi and Petr Ptacek spent the entire race fighting over the final podium position. Ptacek managed to find a way past his championship leading team-mate early in the race, and put up a strong fight to stay ahead of Lorandi.

Lorandi pushed hard, at one point able to pull alongside his team-mate, but couldn?t make a move stick and had to settle for fourth.

Leaving Imola, Lorandi lies 16 points ahead of Fittipaldi in the championship standings, with Fittipaldi’s Prema team-mate Olli Caldwell a further 70 points back.

The first safety car came midway through the race, when Andrea Dell?Accio and William Alatalo came together. Alatalo was pitched into the air, landing on top of Ilya Morozov and sending them both into the gravel. Dell’Accio was able to continue, though finished towards the back of the field.

Gregoire Saucy took fifth after a race long battle with Gianluca Petecof, who took a third sixth place in a row.

Niklas Krutten finished seventh, ahead of Javier Gonzalez and Caldwell, who dropped back after a wide moment at the start of the race. Giorgio Carrara completed the points.