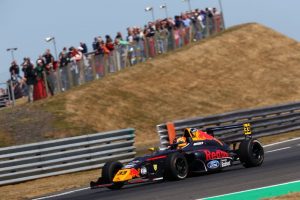 Jack Doohan came out on top in a chaotic third British Formula 4 race at a damp Snetterton.

The Red Bull junior started the race in fifth, but was third by the end of the first lap after moving past championship favourites Kiern Jewiss and Ayrton Simmons.

Jewiss broke his front wing, pushing him down the order, and two laps later Doohan’s Arden team-mate Patrik Pasma span out of the lead.

Unlike the previous leaders he kept it under control, and drove home to his second victory of the season.

Doohan’s team-mate and fellow Red Bull junior Dennis Hauger started alongside him on the grid, but made no progress on the first lap. By the time Doohan took the lead he was up into third though, and he repeated his team-mate’s move on Hoggard to take second.

Third place for Hoggard was only his third podium of the season, having come into the season as one of the title favourites.

Race two winner Paavo Tonteri finished fourth, gaining the spot after Hoggard’s team-mate Hampus Ericsson took a detour through a hayfield on the exit of the first corner. Ericsson was considering not entering the race, as he did in the first two races, having become fed up of his lack of good results.

Before his off Ericsson had barged past Simmons for fourth, and the JHR Developments driver came home fifth, an important result as the wingless Jewiss finished out of the points.

Poleman Pasma recovered to sixth, only just behind Simmons and with a big gap to Arden team-mate Seb Priaulx.

Lucca Allen matched his best result of the season in eighth, ahead of Manuel Sulaiman and Jamie Sharp. Sulaiman did finish ahead of Priaulx, but was penalised 10 seconds for jumping the start.