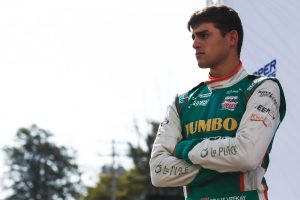 VeeKay started second and retained his position at the start. BN Racing’s Malukas built a gap at the start, but on lap seven of the 25 came to a halt with what he called “engine trouble”.

From then on, VeeKay resisted pressure from Juncos team-mate Robert Megennis.

Megennis set faster lap times in the race, and took fastest lap, but was unable to find a way around his team-mate. His best chance came on a caution period restart, which came about when the third Juncos entry driven by Carlos Cunha came to a halt on lap 19. VeeKay held on though, and took his sixth win of the season.

Oliver Askew took his third podium of the season behind them after a fairly controlled race. The Cape Motorsports driver did pressure Megennis on the restart, but was unable to make a move stick.

Drugovich finished fifth after an excellent opening couple of laps where the rookie made up five positions, before dropping back after being passed by Robb. Thompson finished sixth, and is now 25 points behind VeeKay.

After sustaining a wrist injury, Andres Gutierrez did not start the race.