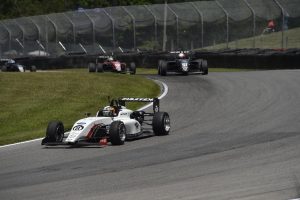 The Cape Motorsports driver was beaten to pole for the second race by Pabst Racing driver Kaylen Frederick. Frederick outbraked himself going into Turn 2 on the first lap, handing Kirkwood a lead he wouldn’t relinquish.

Frederick’s Pabst team-mates Lucas Kohl and Rasmus Lindh also got past, and started to fight over second place.

Exclusive Autosport’s Igor Fraga also got involved, and he sneaked past Lindh after a caution period required to recover the stranded cars of Sabre Cook and Frederick, who had been fighting his way back up the order.

Kirkwood took his ninth win of the season by 5.7167 seconds over Kohl, with Fraga and Lindh in third and fourth.

The grid for the third race was set by the fastest laps from the second, resulting in DEForce’s championship debutant James Raven taking pole. Kirkwood was second fastest, and once again it took just two corners for him to take the lead.

Raven gamely held on initially, but in the latter stages of the race Kirkwood upped his pace, winning by over six seconds and taking fastest lap on the final tour.

The battle for third behind Raven was between BN Racing’s Keith Donegan and Lindh. Donegan looked to have it after defending staunchly throughout the race, but once Lindh did get ahead he pulled away, taking his fourth podium of the season and marking himself out as the mean to beat in the battle for second in the standings.

A collision between van der Watt and Frederick early in the race dropped both down the order, with the pair eventually finishing 14th and 19th after a penalty for Frederick.

Dickerson was another who also finished far lower than he should, making two rises up the order but only greeting the chequered flag in 18th.