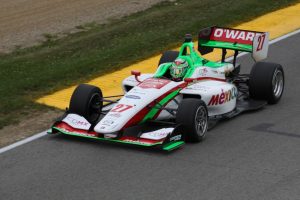 O’Ward repeated his race one performance of controlling the pace up front, while Andretti team-mate Herta had to overcome Belardi Auto Racing’s Aaron Telitz before he could challenge for the lead.

Herta had no answer to O’Ward in the first half of the race, possibly because he was saving tyres, and was put back onto O’Ward’s gearbox when a caution period occurred after Telitz was span by Juncos Racing’s Victor Franzoni at Turn 5.

After that caution period he kept with the leader, with the two trading fastest laps. On multiple occasions Herta got close enough to challenge, but the dirty air of the leader made it difficult to overtake and Herta conceded victory on the final lap, dropping back several seconds.

The caution period also assisted their team-mate Ryan Norman, who hounded Telitz’s team-mate Santiago Urrutia before putting a move on him with nine laps to go for third place. The result matched the podiums he got at St. Petersburg and Toronto.

The fourth Andretti car of Dalton Kellett had a lonely drive to fifth, while a drive through penalty for the contact with Telitz left Franzoni in sixth place. Telitz finished a lap down, and now level with Kellett for sixth in the standings.