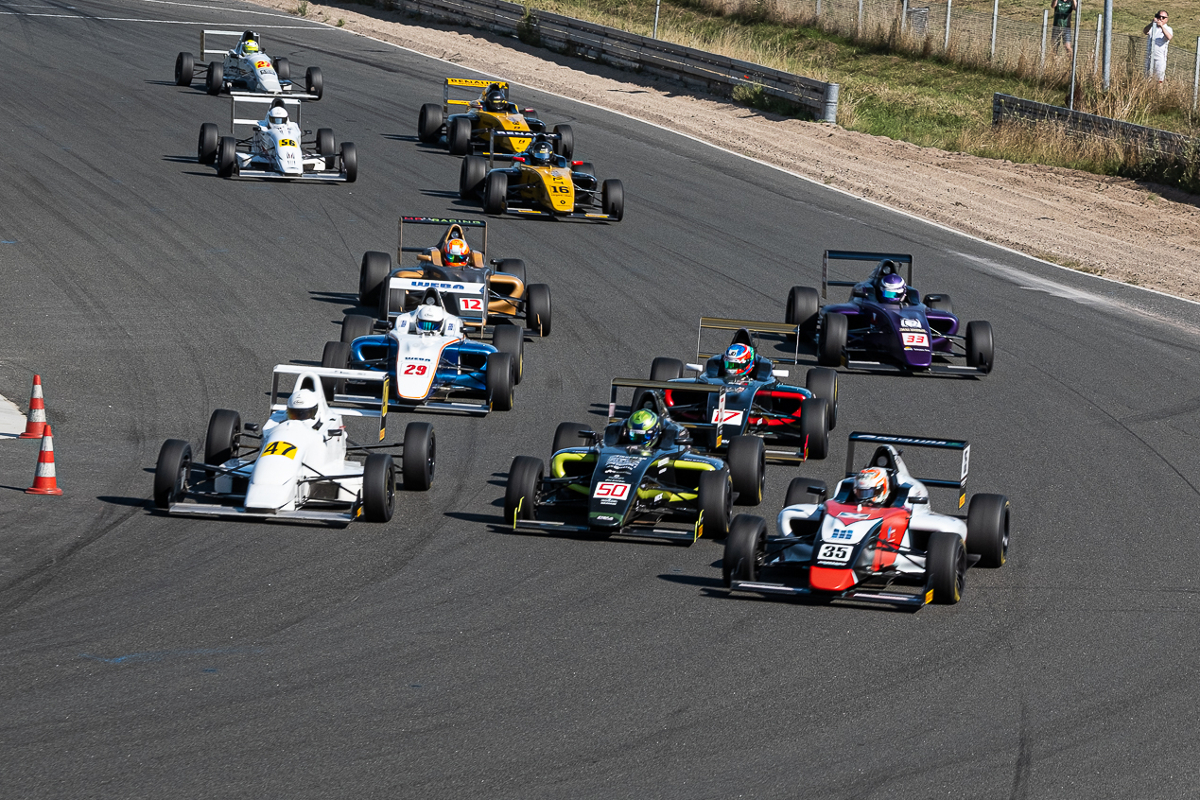 Mads Hoe is now the joint most successful Danish Formula 4 driver in history after winning three times in an expanded four-race weekend at Ring Djursland.

Hoe topped qualifying, beating Gravlund by 0.108 seconds and Victor Nielsen by 0.121s, then held off Gravlund through the early laps of race one. Crazy scenes followed.

“Gravlund misinterpreted the safety car on the line-up lap and passed it although its lights were still on,” the series’ media officer Kim Gripping told Formula Scout. “Five drivers followed him, which resulted in instant disqualification for six drivers.”

The F4 sextet of Victor Nielsen, Gravlund, Mika Abrahams, Julius Dinesen, Theodor Jensen and Magnus Pedersen were all disqualified mid-race and it left a podium consisting entirely of Formula 5 cars.

Reigning champion Hoe won by 26.238s ahead of Niels Ejnar Rytter, who earned his first podium having competed since Danish F4’s inaugural season in 2017, and Hoe’s debuting team-mate Oliver Kratsch.

The race one results were reversed for race two’s grid, although a draw had to take place to determine the starting order of the disqualified drivers.

In this race Kratsch got disqualified for failing to take a pitlane penalty handed out after he jumped the start, and Hoe won after going from sixth to first on the opening lap.

STEP Motorsport’s Victor Nielsen passed four cars on lap one then steadily progressed up to second place but could not cut Hoe’s lead.

Championship leader Dinesen did run second early on but was demoted to fourth in the end by Abrahams and the charging Gravlund.

Mille Hoe lined up on reversed-grid pole for race three but jumped the start and immediately copped a penalty, with Dinesen committing the same offence from fourth and Mads Hoe getting disqualified “for driving outside the lane limit”.

Pedersen led the first few laps before being overcome by Gravlund, who had Abrahams following his rise up the order and then pressuring him all the way. He won by 0.406s, with Dinesen classified third following his penalty. Mille Hoe claimed her fifth F5 win in sixth.

Her older brother Mads had pole for race four and took another win, a record-equalling 13th in the series, resisting Gravlund through the first half and then being able to slightly relax as Gravlund spent the second half defending from Abrahams.

Dinesen beat Nielsen to fourth in a photo finish. His points lead has been halved over the weekend.