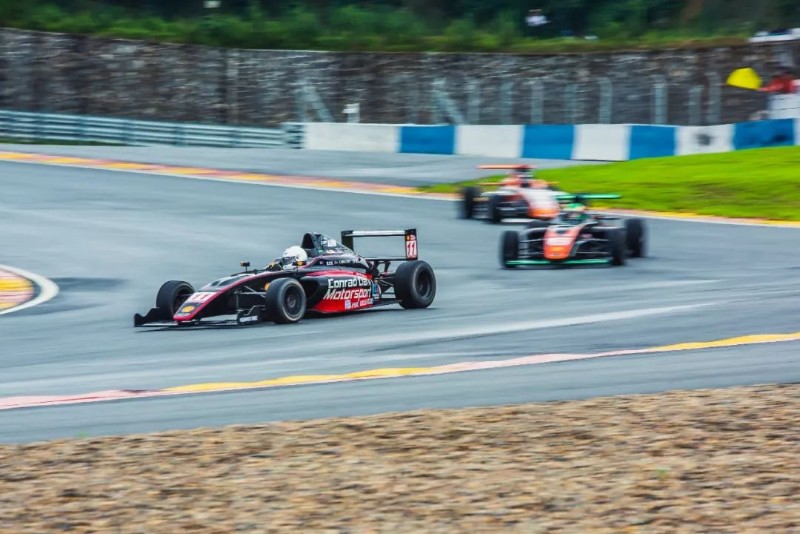 The New Zealader took his first pole in a wet qualifying session, and as the rain continued the first race had to start under safety car conditions. There was only a few laps of green flag running before the safety car was out again for an accident.

Smart Life Racing Team’s Zijian He briefly dented Clark’s lead at the head of the race, but the championship leader responded to take a resounding win.

Clark led from the front once again in race two, which was also interrupted by the safety car. The top five cars spread out quickly once action resumed, with Clark beating tital rival He and X-Racing Team’s Shang Zongyi. An intense battle for fifth place was won by Zhiwei Lu, who edged BlackArts’ new signing Nicholas Lai of Macau.

The reversed grid race three was where Clark showed his talent best, as he rose from ninth to the lead within half a lap in treacherous conditions. From there he pulled away for an astonishing ahead of He, who also had to battle his way through the order, and Jing Zefeng.

In South East Asia, Finnish driver Elias Seppanen moved into the lead of the standings with three wins out of four at India’s Madras circuit. Each one was a close battle, the first of which was against local Yash Aradhya. It was the Indian’s first podium, and he followed it up with a third in race two, where Alister Yoong edged Shihab Al Habsi to success.

Al Habsi kept up his challenge in race three, where he hassled Seppanen right to the finish line. Seppanen had started third, but pasted poleman Al Habsi and Muizz Musyaffa before the first corner of the race.

Having been unlucky with damage earlier in the weekend, Lucca Allen finally threatened for victory in race four but lost out to Seppanen, conceding the championship lead in the process.

The relaunched F4 SMP held its fourth round at the Kazan Ring, with Artem Lobanenko winning both races on his championship return. A second place finish behind Lobanenko in race two was enough for Pavel Bulantsev to cling on to the points lead, but he had no answer to Lobanenko’s pace.

Alexey Nesov was the runner-up in race one, albeit 12 seconds down on victor Lobanenko.