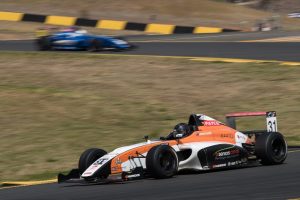 Ojeda was beaten to both Sydney poles by AGI Sport team-mate and title rival Ryan Suhle, but wheelspin for the latter off the line handed race one victory to Ojeda. Team BRM’s Aaron Love moved into second, with team-mate Lochie Hughes holding third until a late race charge by Suhle demoted him to fourth.

Jackson Walls finished fifth and started race two from pole, but it was Love who led into the first corner. Suhle threw away his third placed start with an off at Turn 8 that dropped him to the back, with Ojeda almost doing the same. It took Ojeda six laps to move past Love for the lead, and he pulled away to take his 11th victory of the season by 5.0817 seconds.

Love looked after his tyres in second, a considerable distance ahead of Walls, Suhle and Hughes.

Poleman Suhle’s tyres were exhausted for the final race, but he got his best result of the weekend with second behind Ojeda. Love was on the podium once again in third, although is now out of title contention, with Hughes and Team BRM’s Zayd Tones completing the top five.

Irishman Jordan Dempsey moved into the Chinese F4 lead at Shanghai, winning two of the three races at the Formula 1 circuit.

Dempsey won again in the second race, while Hishammudin took the chequered flag two laps down. Yufeng finished second once again, this time with fastest lap and on the gearbox of Dempsey, with CFGP class winner Zongyi completing the podium. Wancheng finished fourth, just ahead of Hishammudin’s team-mate Kang.

He Zijian, a CFGP driver who had yet to appear on the podium in 2018 and finished seventh and sixth in the first two races, won the final race by a dominant six seconds. Karging League driver Yufeng made it a hat-trick of second places, ahead of FFA Racing driver Wancheng, Zongyi and Freely Racing Team’s Chen Bohan.

Yufeng was the only finisher of the F4 entrants, with Dempsey, Hishammudin and Federico Malvestiti, a regular in Italian F4, all retiring. Dempsey told Formula Scout he was “sent into a wall at over 220kph and had to be taken to hospital for bad pains in my neck but all was OK”.