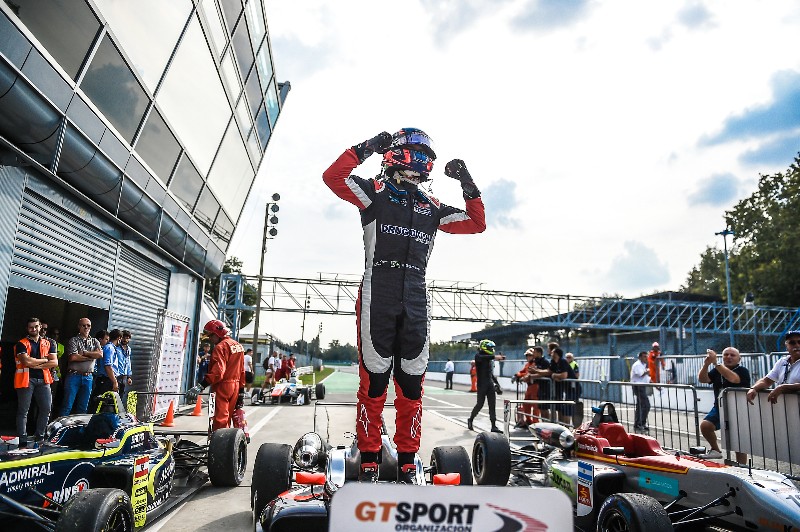 RP Motorsport?s Felipe Drugovich won the 2018 Euroformula Open title with four race to spare in another commanding display to win at Monza.

Drugovich resisted pressure early on from his rivals, who one by one dropped out of contention. Once he was out of reach of? the slipstream, he was unstoppable. His eventual winning margin over championship rival was Bent Viscaal by 5.686 seconds.

Viscaal started on the front row alongside Drugovich, but the Teo Martin Motorsport driver made a mistake early on and dropped down into fourth behind Campos?s Marcos Siebert and RP?s debutant Leonardo Lorandi.

Siebert retired after mounting the rear wing of Lorandi in the middle of the race, which was extended to 18 laps due to a safety car caused Dev Gore hitting Aldo Festante. Remarkably Lorandi was able to continue despite missing almost all of his rear wing, and went on to finish sixth.

The final podium position was decided between Carlin pairing Cameron Das and Matheus Iorio. The race-long battle ended with Das narrowly on top. After a difficult first race, American Kaylen Frederick finished in fifth by keeping out of trouble. He finished just ahead of RP team-mate Lorandi, and took fastest lap.

However, Frederick is under investigation for overtaking team-mate Guilherme Samaia at the Roggia chicane, which was under yellow flags due to contact between Lukas Dunner and Alex Karkosik that eliminated both in the closing stages.

Samaia finished in seventh, despite running wide onto the gravel on no fewer than three occasions.

Despite being hit at the start, Calan Williams finished in eighth. The Fortec driver was brought back into contention by the safety car earlier on, and is now in the top 10 in the championship

Christian Hahn and Gore rounded out the points and the finishers, with Hahn in contention for a podium before running very wide at the first Lesmo.