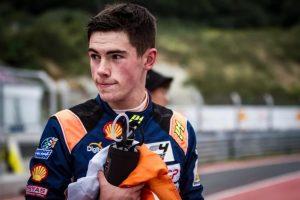 Dempsey is also a winner in Formula Ford 1600, but has been focused on his F4 exploits this year with Pinnacle Motorsport.

He started his Ningbo weekend with pole, with Canadian debutant Maxx Ebenal, who finished second in Asian Formula Renault in 2016 and usually driver coaches F4 drivers, by almost a quarter of a second.

Dempsey retained the lead at the start, with BlackArts Racing returnee Daim Hishammudin jumping to third. A lap one crash led to a lengthy safety car, and when racing resumed there was no catching Dempsey. He finished the race with five seconds in hand, with Hishammudin a further four back.

He Zijian continued his strong form of late in fourth, ahead of Zheng Wancheng and Dempsey’s title rival Luo Yufeng.

The race one result set the grid for race two, in which Dempsey had to finish third to take the title. A overly cautious start meant he immediately dropped to fourth, with Ebenal taking the lead. On lap 3 Dempsey reclaimed third, and gained another spot when Hishammudin damaged his front wing when attacking Ebenal.

Victory was still on Dempsey’s mind once into second, and he attacked Ebenal on several occasions. The Canadian held on though, taking victory by 0.498s. Hishammudin managed to finish third, ahead of Wancheng and Yufeng.

Having missed the Wuhan round, and lost his title hopes in the process, Hishammudin ended his season on a high by winning the final race. Zijian was the leader early on, but found it difficult as rain struck the circuit. Yufeng took the lead as the conditions got worse, but lost the spot after contact with Ebenal.

Hishammudin took the lead, with Wancheng also getting through. Both Ebenal and Yufeng continued, with Dempsey separating them in fourth come the end of the race.

Shang Zongyi finished the three races in seventh, sixth and seventh, just holding on to fourth in the standings over Wancheng.

Enzo Bortoleto, who took pole for the first ever Formula Academy Sudamericana round at the Polideportivo Ciudad de Mercedes circuit in Uruguay in 2014, returned to the championship at Brazil’s Vello Cita Autodrome with another pole and his first two wins.

Bortoleto beat Juan Vieira to pole by a third of a second, and the 20-year-old followed that up with a composed first victory. Bruno Testa beat Vieira to second, with pre-event championship leader Leandro Guedes heading Pedro Burger in fourth.

USF2000 driver Bruna Tomaselli finished several laps down, with Geraldo Rodrigues being the only retiree.

Having taken over four years to stand on top of the podium, Bortoleto did it again in the reversed grid second race from sixth on the grid. It didn’t make much for him to make it into third place, before a gripping battle with Tomaselli and Vieira. He eventually pulled away though, and ended up 2.694s in front by the chequered flag.

Second place for Tomaselli jumps her into fourth in the standings, while a second podium for Vieira just pushes him past Guedes, who finished fifth, at the top of the points.