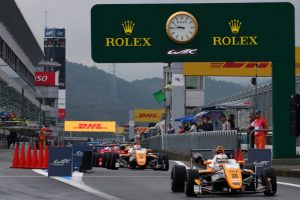 Sho Tsuboi continued his Japanese Formula 3 domination at Fuji, taking his 12th consecutive win in the final race of the season.

TOM’S driver Tsuboi took a lights-to-flag victory in the opening race of the weekend, before recovering from a poor start in race two.

He was able to escape up the road at the start of race one as team-mate Ritomo Milyata span from the front row at the first corner. Tsuboi quickly set about building a gap to the rest of the field, finishing more than 24 seconds ahead of Toda Racing’s Sena Sakaguchi.

Sakaguchi started the race fifth, but was soon challenging Shunsuke Kohno for the final podium position. He made the move for third on the start finish straight and quickly closed the gap to team-mate Toshiki Oyu in second.

Oyu put up a good defence, holding Sakaguchi up and allowing Tsuboi to escape further up the road before Sakaguchi managed to find a way through.

RS Fine driver Kohno caught Oyu in the closing stages of the race, with the pair running side by side for a number of corners. Oyu initually managed to hold onto the position but Kohno swept past on the pit straight to take his first podium of the season.

Riki Okusa finished fifth in his first race of the season, ahead of the recovering Miyata, Ai Miura and Tairoku Yamaguchi. DRAGON and championship newcomer Tatsuya Oto completed the top 10.

Tsuboi started on pole again for race two, but a slow start allowed Miyata to snatch the lead. In wet conditions, Miyata managed to pull away from his team-mate as Tsuboi battled to keep Ukyo Sasahara behind him. He eventually managed to shake off ThreeBond driver Sasahara and closed the gap to Miyata.

The champion reclaimed the lead on lap 6, but he wasn?t quite able to storm away as he had done in the opening race. Sasahara also found a way past Miyata and began to challenge Tsuboi in an attempt to take his first win of the season.

Tsuboi held onto the lead, finishing four seconds ahead of Sasahara to take his 17th?win of the season. Mityata took his 15th podium of the year in third, ahead of Oyu, Kohno, and Sakaguchi.