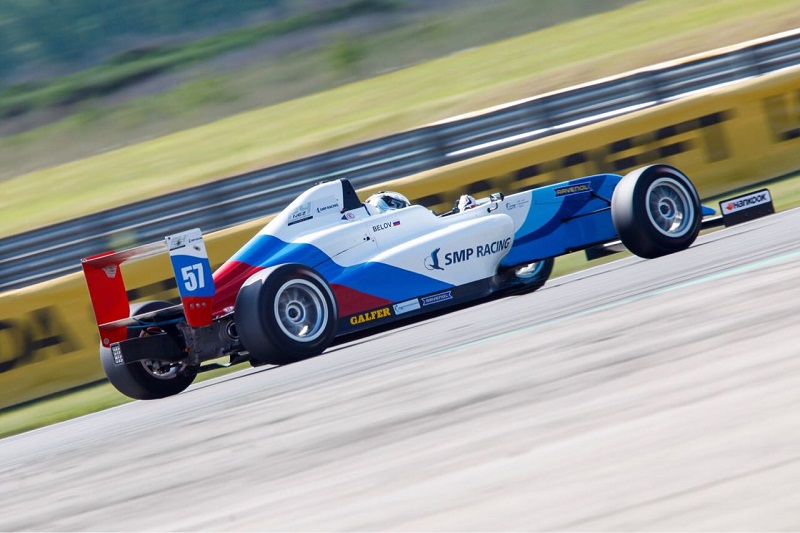 Mikhail Belov closed in on the Formula 4 North European Zone lead with two victories at the NRing circuit in Russia.

The SMP Racing driver, the best placed of the returning drivers from 2017, failed to visit the podium in the first round of the 2018 season at the Smolensk Ring, but set that right by breaking his victory duck at the track near Nizhny Novgorod.

Belov lost out on pole for the first two races to Konsta Lappalainen, but a jumped start and accidentally killing his engine on the grid meant the Finn did not challenge for victory.

Championship leader Isac Blomqvist took up the role of opposition to Belov, but he could do nothing to stop the Russian taking his first victory by over 10 seconds.

Lappalainen’s start drama didn’t benefit Belov in the second race, as the latter collided with the poleman’s stationary vehicle. A safety car was required, and on the restart it was front row man Pavel Bulantsev who led the field away.

The 2017 CIK-FIA European OK Class runner-up had Blomqvist in his mirrors for the rest of his race, but managed to hold on to take his first car racing victory.

Belov took pole for the final race of the weekend, with Lappalainen second. The damage caused by their race two collision was still being worked on minutes before the third race, but it seemed to have no effect on their race pace.

Another weak start did mean Lappalainen had to battle from the back, but Belov led from the front to take his second win ahead of Blomqvist. Bulantsev finished a very distant third, just ahead of Shvetsov and Lappalainen.

With many of its drivers competing in the NEZ event, the?second round of the Spanish F4 championship was cancelled due to a lack of entries.

Ojeda stepped up to F4 this year after three years in Formula Ford, finishing third in the national championship last year.

He wasted his first F4 pole advantage in race one at Phillip Island, dropping several places, but fought back to beat championship leader Cameron Shields to victory. Aaron Love completed the podium in third, ahead of title contender Ryan Suhle and Lochie Hughes.

Having taken victory off the back of overtakes in the first race, it wasn’t too difficult for Ojeda to do the same in the reversed grid race. The top five positions were filled by the same drivers, with Ojeda setting fastest lap.

Ojeda took pole once again for the final race, and this time didn’t scupper the start. A more assured four second victory was the result, this time ahead of Suhle. A driveline problem for Shields meant he failed to finish, with Love completing the podium. Jackson Walls took his best finish of the season in fourth.

Shields’ retirement means he now holds a one point lead over Suhle, with Ojeda a further point behind.

As BlackArts Racing team-mate Daniel Cao did at Ningbo, Daim Hishammudin took a clean sweep of victories, poles and fastest laps at Zhuhai in the second round of the Chinese F4 championship.

The Monster-backed Alex Yoong protege was untouchable throughout the weekend, and now leads the championship by 13 points over team-mate Cao.

Cao was relegated to third best over the weekend, as Formula Ford star Jordan Dempsey took two podiums on his F4 debut with Pinnacle Motorsport.

Zijian He won the Formula China Grand Prix classification in fourth overall in the first race, with Zongyi Shang taking the win in the remaining two races with outright podiums. Shang also sits third overall in the standings, three points ahead of Yufeng Luo.

Aldo Festante switches to Fortec for Spa Euroformula Open round