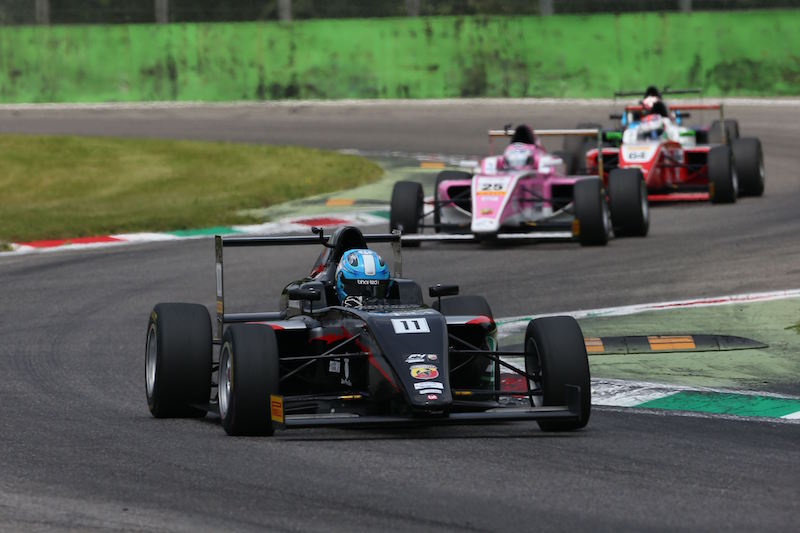 Wins in the first and final races of the weekend, as well as?a fourth-place finish in race two, gives the Italian an advantage of 23 points after the third round.

In both races Lorandi took the lead at the first corner from polesitter Gregoire Saucy, and both times controlled the race even with multiple safety cars.

Lorandi was on pole for the start of race two, but halfway through lost the lead to William Alatalo after a race restart, and then fell down to sixth position after being forced onto the grass at Curva Grande. He eventually made up two places to finish the race in fourth.

Alatalo led the second half of the race after getting past Lorandi, with the BWT Mucke Motorsport driver gaining his first win of the season. He also finished in second place behind Lorandi in race three and fourth in the first race of the weekend, moving him up to sixth in the drivers’ standings.

After a race win and a podium at Paul Ricard in May, Prema Theodore Racing’s Olli Caldwell was on the podium in all three races at Monza after finishing second twice and then third in the final race of the weekend.

In neither of the three races did Caldwell start inside of the top three. In race one he started from seventh, but his charge to second was helped by his team-mate Enzo Fittipaldi crashing into Bhaitech’s Petr Ptacek and other drivers having trouble.

Fittipaldi, who was leading the points arriving at Monza, had a difficult weekend. Along with his crash in the first race, the Brazilian also crashed at the Parabolica on the final lap of race two along with Saucy after running in the top 10.

He did manage to salvage his weekend with a fifth-place finish in the final race, but he fell down to third in the drivers’ standing and behind Lorandi and Caldwell.

While he didn’t make his way onto the podium, Federico Malvestiti moved from seventh to fifth in the championship after two fifth-place finishes and sixth in the final race.

Although he started from pole position in two races, Jenzer’s Saucy leaves Monza with just two points after a ninth-place finish in race one.