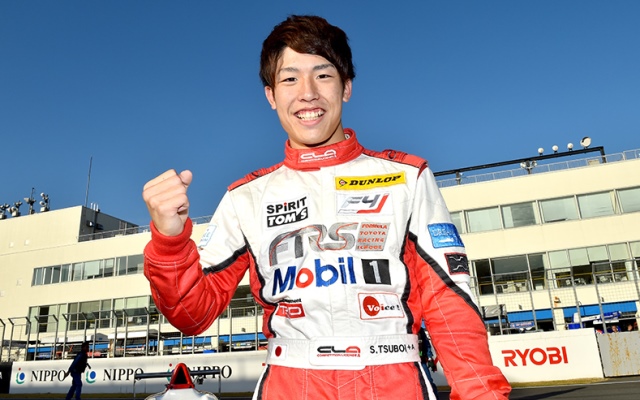 The Japanese Formula 4 champion Sho Tsuboi will step up to join Kenta Yamashita in the Toyota-backed TOM’S team in the national F3 series in 2016.

Revealed as Toyota announced its motorsport plans for the coming year, Tsuboi will join Yamashita – as well as 2012 and ’13 Japanese F3 champions respectively Ryo Hirakawa and Yuichi Nakayama – on the Toyota Young Drivers Program (TDP).

Graduates of the TDP include ex-Formula 1 racers Kazuki Nakajima and Kamui Kobayashi, who are now both part of Toyota’s World Endurance Championship squad.

Tsuboi won the inaugural season of Japan’s FIA F4 series in 2015, winning seven races as he overhauled early leader Tadasuke Makino and then doing enough to hold on to win the crown by three points as his rival won both races at the final round.

Having competed under the TOM’S Spirit banner in F4, the 20-year-old will now effectively replace champion Nick Cassidy in the F3 line-up after the Kiwi landed a seat in Super GT.

Yamashita, also 20, has finished runner-up in Japanese F3 for the past two years with TOM’S and will now attempt to go one better in his third campaign.