With Formula 1 testing so limited these days, this week?s Young Driver Test at Abu Dhabi is just about the only opportunity in the year that young drivers can get to rack up some proper mileage behind the wheel of a current F1 car.

PaddockScout gives you the lowdown on each of the drivers taking part?

After Daniel Ricciardo?s graduation to Formula 1 this year, Jean-Eric Vergne becomes the next hungry young driver in the Red Bull production line that is their Junior Team programme. The Frenchman followed in the footsteps of Alguersuari and Ricciardo by winning the British F3 title at the first attempt in 2010, and this year moved on up to the Formula Renault 3.5 Series. ?Just like Ricciardo 12 months before him, Vergne narrowly missed out on the title. He won races at Spa and Monza, before a double victory at the Hungaroring and a home win at Paul Ricard.

Last year he did the full Young Driver Test for Toro Rosso, so should be comfortable behind the wheel of the championship-winning Red Bull around the Yas Marina circuit. He is looking at opportunities in F1 for 2012, but failing that will most likely remain in FR3.5 alongside continuing his Friday testing role for Toro Rosso, just how Ricciardo began 2011.

McLaren go with the very same all-British lineup as they did 12 months ago. After winning the German F3 title in 2002, Paffett found further success in the DTM where he was champion in 2005. Since then he has been a test-driver for McLaren, without ever getting the chance to race. Now at the ripe old age of 30, he?s pushing the definition of a ?young driver?!

Turvey was runner-up to Alguersuari in British F3 in 2008, moving onto FR3.5 the following year where he won in Monaco and finished fourth overall. In 2010 he raced in GP2, finishing fifth overall. After testing for McLaren at the end of the year he then found himself on the sidelines after coming to the end of a support programme from the Racing Steps Foundation. He continues to work with McLaren though, doing simulator work as well as racing for their GT team. 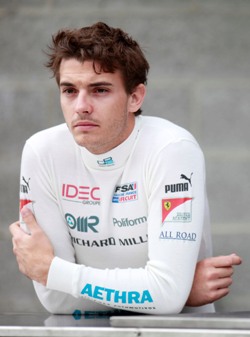 Ferrari once again gives the entire test to their reserve driver Bianchi. After dominating the F3 Euro Series in 2009, the Frenchman arrived in GP2 with expectations that he would succeed fellow ART drivers Hamilton and Hulkenberg by winning the series in his first year. He failed in that objective, only managing third overall.

He was again expected to fight for the title in 2011, but had such a dreadful start to the season that he was pretty much out of contention before the half way mark. Rescued his season with some consistently good results to finish third again, but rarely demonstrated the crushing pace he had in lower categories. Looking to graduate to F1 for 2012, but race opportunities are limited so may have to settle for a Friday role.

Another man retained for a second year in succession, Bird has raced in GP2 for the past two years. He had an impressive debut season with ART in 2010, winning at Monza and coming fifth overall. 2011 started well after switching to iSport, tying for the series lead after the season opener at Istanbul, and again one round later after Barcelona. His season went downhill after stalling from pole position in Monaco. He was never quite on the same pace, and just had to rely on regular lower points finishes, finishing sixth overall.

Despite never being officially named as a member of the Mercedes team, Sam has been doing development and simulator work for them all year. In fact, his Twitter avatar shows him riding on the back of Schumacher?s moped in Canada. He looks likely to keep race sharp in 2012 by remaining in GP2, where he will no doubt try and go for the title.

Despite being a reserve driver at Virgin, Wickens gets a run with Renault as a prize for winning the Formula Renault 3.5 Series. The Canadian was runner-up in F2 in 2009 and then GP3 in 2010, and was previously a Red Bull Junior. More about him in a bit?

After winning the Eurocup Formula Renault title in 2010, Korjus stepped up to FR3.5 in 2011. At just 18, he won on his debut weekend in Aragon. Further wins came at Monza and the Nurburgring, though his season tailed off a little near the end and he finished sixth overall. He is managed by Gravity, the scheme with links to team boss Eric Boullier and owner Gerard Lopez.

Czech driver Charouz made a return to single-seaters in 2010 after winning the Le Mans Series title for Aston Martin in 2009. He has been part of Renault?s roster of reserve drivers, and done demonstration runs for the team. On the racing front, he has only managed a scattering of points finishes in FR3.5, this year driving for the team his father runs together with Gravity. He entered the GP2 Final last weekend to familiarise himself with the Yas Marina track, carrying Genii logos on his car. 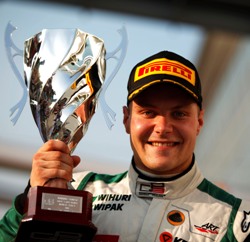 Williams? lineup looks pretty impressive on paper, with two newly crowned junior champions. Their reserve driver Bottas won the GP3 title this year, having begun as the favourite off the back of two good years in the F3 Euro Series where he became the first double winner of the prestigious Masters event. His GP3 campaign started poorly but a run of wins and podiums in the second half of the year clinched him the title. This will be his first proper test for Williams, having missed out to Pastor Maldonado 12 months ago. Next year he seems keener on a title tilt in FR3.5 than a rookie campaign in GP2.

Bortolotti meanwhile dominated the FIA Formula Two Championship, and this Williams test is his prize for doing so. He has previous F1 mileage from his spells as part of both Red Bull and Ferrari?s driver development programmes. Red Bull let him go as part of a mass clearout of their cluttered scheme, while Ferrari let him go after a disappointing year in GP3 last year.

Chilton has raced in GP2 for the past years after making the jump up from British F3. While 2010 was a difficult learning year for him, 2011 saw an improvement in pace for Carlin (the team owned by his father Grahame, vice-chairman of insurance giant Aon who also happen to sponsor McLaren). Results were still hard to come by though, managing just three points finishes. He did a straightline test for Force India earlier in the year, and now gets to do a full test.

Another driver with plentiful backing, Venezuelan Cecotto has made 43 starts in GP2 (inc. Asia) over the past three years, scoring just six points. His father was a former F1 driver and motorcycle world champion. His run for Force India will be his first in an F1 car.

Gutierrez first tested for the Swiss team at the end of 2009 as a prize for winning the Formula BMW Europe title the previous year. He tested for them again last year after dominating the inaugural GP3 season, and this year has been the team?s official reserve driver (though he was ignored in favour of Pedro de la Rosa when fellow Mexican Sergio Perez couldn?t race in Canada). He finished his first season of GP2 in 13th overall, with a win at Valencia. He will remain with the ART team for a title bid next year.

After winning the Formula Master title in 2009, Swiss driver Leimer has raced in GP2 for the past two years. Despite showing strong pace in testing, he had just two sprint race wins at Barcelona to his name. That was until last weekend when he dominated the feature race after being very quick in testing. With good backing, a strong third season in GP2 could give him a shot at an F1 race drive.

With the remaining Red Bull Juniors deemed not to have sufficient experience, Toro Rosso opened their doors to other drivers for test. Coletti, ironically, used to a Red Bull driver and still has the energy drink firm?s logo on his helmet. 2011 was due to be his first full year in GP2, until it was cut short by a back injury at Spa. He still racked up three sprint race wins though with the less-fancied Trident squad.

Ceccon won the Auto GP title this year in his first year out of F3, at the age of just 18. He may not have so fortunate had his three biggest rivals not all missed a round, but his maturity in such a high-powered car was still impressive. Auto GP organisers Coloni gave him selected GP2 chances, and he scored two top six finishes for them in the Final last weekend. 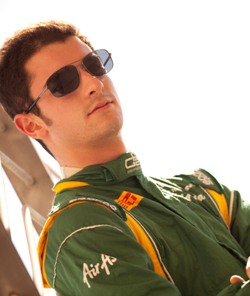 Yet another well-backed Venezuelan, Gonzalez drove for Lotus in the same event last year. Just 4 points in 56 GP2 starts over the last three years is a pretty unenviable record, particularly when he scored none this year driving for same team as three-time winner Coletti.

Razia tested in Abu Dhabi for Virgin last year, after a year as their reserve driver. He moved onto Lotus this year, getting a run out in practice in China. He also drove for the sister AirAsia GP2 outfit, but could muster only two podiums and a pole position in what was his third GP2 campaign.

Rossi is the favourite to end the drought of American drivers in F1, and this year finished third in his rookie year in FR3.5. After being taken on by Tony Fernandes earlier this year, he looks likely to race for their GP2 outfit next year after making his debut last weekend.

HRT?s new owners are keen to have a Spanish driver, and Clos looks like the most suitable candidate after three mixed years in GP2. His first produced just one points finish, but last year he ended up fourth overall with one win to his name. 2011 was more of a disappointment, managing just two podium finishes and slipping to ninth overall. He previously enjoyed the support of Renault after winning the Italian Formula Renault title in 2006, and later tested for Williams in 2008.

Frenchman Berthon has raced in Formula Renault 3.5 for the past two years, finishing seventh overall in 2010 before slipping to 13th this season. He raced alongside Clos in GP2 Asia earlier in 2011, and then returned to the Racing Engineering squad last weekend.

Quaife-Hobbs gets his reward for being the highest-classified driver for the sister Manor outfit in GP3 this year, where he finished fifth overall with a win at Valencia and poles at Silverstone and Monza. He also performed straightline tests for Virgin in Spain and the UK. He looks likely to move on to FR3.5 next year after some good showings in tests.

Pic is rumoured to have already signed to race for the team in 2012. Racing in FR3.5 in 2008/09, the Frenchman scored two wins in each season. He stepped up to GP2 in 2010 and won on his main series debut, before this year finishing fourth overall, only losing out on the runner-up spot in the very last race. Despite his strong record, this will be his first F1 test.

With team shareholder Marussia funding his title-winning FR3.5 campaign, Wickens was signed by Virgin to be their reserve driver earlier in 2011. He got to drive for them in free practice on Friday in Abu Dhabi. He had hopes of a race drive for them in 2012, but looks to have lost out to Pic on that one due to his lack of funding.