Evans leads Lynn home in race one at Hampton Downs 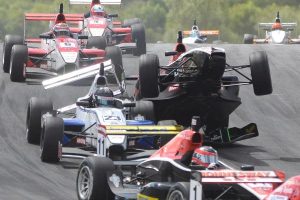 Mitch Evans made a winning return to action in the Toyota Racing Series as he claimed victory in race one at Hampton Downs. Evans was chased home by Alex Lynn, following a restart for a first lap crash that saw Bruno Bonifacio fly into the air over the back of Jann Mardenborough.

Bonifacio hit the back of Mardenborough’s car under braking for the downhill hairpin. The Brazilian was out of the race, but some hasty repairs allowed Mardenborough – who had qualified a highly impressive second on the grid – to continue in the race after the red flag.

Evans and Lynn were separated by 0.5 seconds at the chequered flag, with Pipo Derani returning to the podium in third place. Nick Cassidy beat title rival Lucas Auer to fourth and extended his points lead over the Austrian from six to 11 points. Fourth place was extra crucial for the defending champion as the marble draw gave him pole position for race two on Sunday.

Mardenborough made it home in sixth while Dennis Olsen took seventh to record the best result so far of his maiden car racing campaign. Steijn Schothorst took eighth place ahead of Felix Serralles and Andrew Tang.

Akash Nandy joined Bonifacio in retirement when he crashed out on lap six, causing a mid-race safety car.