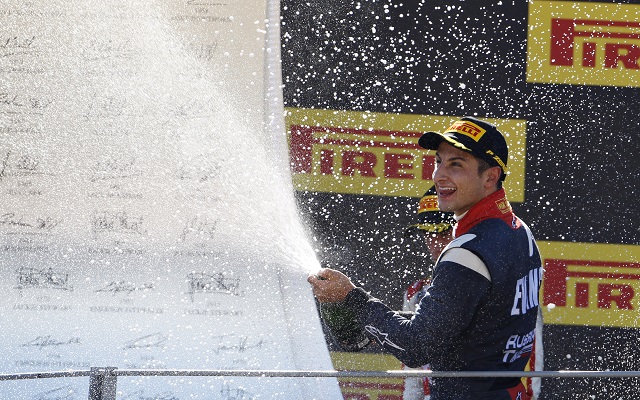 Mitch Evans became the winner of the GP2 sprint race at Monza after overtaking long-time race leader Arthur Pic on the final lap.

The 21-year-old completes his most successful round of the season with a third place and his first victory of this year, despite being excluded from the qualifying earlier on.

The race kicked off with a collision between pole-sitter Jordan King and Norman Nato, the Briton bogging down at the start and then hitting Nato at the first chicane.

Pic subsequently grabbed the lead followed by Richie Stanaway, who was soon reeled in by Evans and Stoffel Vandoorne.

Yesterday’s race winner Alexander Rossi suffered a terrible start but was on his way to make it back to the points, including an overtake on Robert Visoiu.

Just as he made the move stick coming into the second chicane though, the Romanian locked up his brakes behind him and sent Rossi into a spin, ending both of their races.

The safety car made an inevitable appearance and once it went back under green, the race turned into a three-way fight between Pic, Evans and Vandoorne.

It looked like the Frenchman could hold on to his lead, having withheld a race-long pressure but Evans’ relentless charge eventually ended in a last-lap overtake at the first chicane.

Pic tried to fight back but had to settle for second after all, followed by Vandoorne who completed?a cautious race, not trying to get into any trouble.

Stanaway copied his main race result in fourth, followed by the biggest mover of the race Sergey Sirotkin, who fought his way back up to the points from the back of the field.

Lazarus driver Sergio Canamasas secured sixth despite suffering from brake issues towards the end, and the final point-scoring positions went to Raffaele Marciello and Rene Binder.