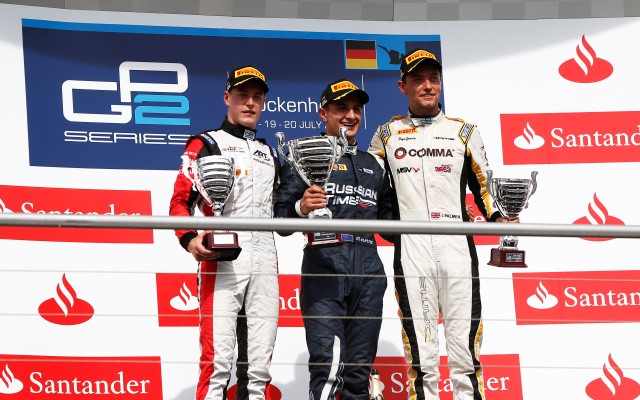 Mitch Evans claimed his second straight feature race win in GP2 with a superb strategic drive from 15th on the grid in a thrilling race at a hot Hockenheim.

Stoffel Vandoorne had led much of the race after getting the jump on pole-sitter Jolyon Palmer at the start, with both starting on the harder prime tyre.

Evans began on the softer option tyre and had got up to fifth by the time he made his pitstop, as the last of the option-starters to do so. He raced his way to the front of those who had already stopped, and then had to clear some of the slower prime-starting traffic. His pace was such that when Vandoorne and Palmer made their tyre change, he rejoined ahead of them.

Vandoorne closed to within 0.4 seconds at the finish, but Evans had kept enough life in his tyres to hold on up front.

Championship leader Palmer rejoined fourth from his pitstop, behind early-stopping DAMS team-mate?Stephane Richelmi. Palmer was easily to able clear him and then spent a while right behind the leading duo, before dropping back to a comfortable third.

Richelmi and Adrian Quaife-Hobbs failed to preserve their tyres and fell back from fourth and fifth to tenth and 14th respectively. Johnny Cecotto made a relatively early switch from primes to option in comparison to the leaders, and this initially enabled him to get up to fifth place.

However, he lacked pace towards the end and was attacked by Felipe Nasr into the stadium section. Cecotto tried to give the Brazilian no space against the inside wall, but the Williams tester still forced his way through and Cecotto slid off into the gravel.

That allowed Stefano Coletti through. The Racing Engineering man spent much of the race in his starting position of third, between Palmer and Nasr, until both fell down the order at their pitstops behind some of the earlier stoppers. The pair had many adventures as they worked their way past the slower cars and traded places several times, with Coletti eventually triumphing and claiming fourth at the very end.

Simon Trummer was the last driver to stop, and used his fresh rubber to charge from 14th to sixth in the closing stages ahead of Cecotto. Nathanael Berthon scored his first points of the season in eighth – a repeat of the feat he managed nearly a year ago in Hungary, when he went on to win the sprint race from reverse grid pole position. After starting 24th, Marco Sorensen got up to ninth on the last lap past Richelmi.

Arthur Pic and Raffaele Marciello sat fifth and sixth during the opening laps and were the leading drivers to start on the option tyres, but when they pitted together to change rubber, both cars died and they ended up finishing 19th and 17th respectively. With the engines seemingly shutting down due to the warm temperatures, others were later warned to keep their engine revs up during their stops.

Sato in control in Auto GP qualifying at Spielberg