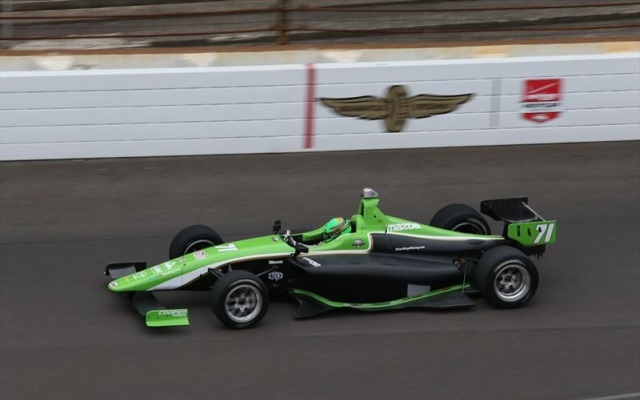 Ethan Ringel will start the Freedom 100 Indy Lights race on the Indianapolis Motor Speedway oval from the front of the field after setting the pace in qualifying.

The session saw each driver going out for two consecutive laps and, as such, Felix Serralles took an early lead, being the first one to hit the track.

He was quickly dethroned by Jack Harvey, who was leading by a significant margin in the first half of the session before Ringel narrowly edged him out with a two-lap average speed of 197.684mph.

Harvey ended up second, while Sean Rayhall‘s great run at Indianapolis continues as his victory at the road course was followed by qualifying third for the oval race. He was the only non-SPM driver to make it into the top five as?Scott Anderson and RC Enerson were fourth and fifth respectively.

Tomorrow’s race will see five Americans starting from the top six courtesy of?Kyle Kaiser, while?British team Carlin’s debut on ovals resulted in seventh and eighth in the order of Max Chilton and then Ed Jones.

The new?Indy Lights car introduced this season has had a strong oval debut, with every driver’s two-lap time went under the series’ benchmark at the track, recorded with the previous chassis?in 2009.