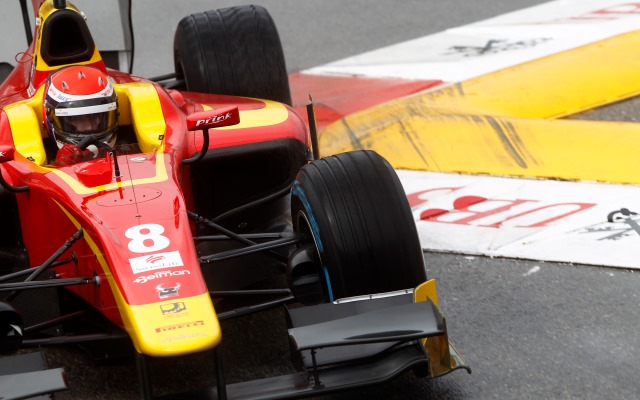 Alexander Rossi has claimed GP2 pole position in Monaco with a dominant display in the second half of a wet qualifying session.

Championship leader Stoffel Vandoorne had his run of consecutive poles halted at six when he could only finish second to Raffaele Marciello in the Group A times.

The Belgian was last beaten in qualifying 10 months ago, at the Hungaroring.

Marciello claimed top spot with five minutes remaining in the first session, beating Vandoorne by a tenth of a second. The Italian then found more time on his next effort to finish up 0.767 seconds clear.

The top five in the group was completed by Julian Leal, Jordan King and Daniel De Jong, who nosed into the barriers at Mirabeau at the end of the session.

Pierre Gasly and Richie Stanaway had both spent time on top of the group but ended up sixth and seventh, while eighth-quickest Zoel Amberg finished up by sliding into the barriers at Tabac and losing a wheel.

Mitch Evans – a three-time Monaco podium finisher in the past two years – was ninth and will start only 18th, but was still quicker than Rio Haryanto?– who had been second in the standings at the start of the session – and Johnny Cecotto and Norman Nato – race winners in GP2 and Formula Renault 3.5 respectively in Monaco.

Rossi was the first driver to set a time in Group B and only briefly lost the session lead shortly afterwards. He dominated the rest of the session as he worked his way down to a time of 1m37.019s (3.3s quicker than Marciello) as the track dried.

Four bonus points for pole move him into P2 in the standings ahead of Haryanto, 36 behind Vandoorne.

Practice pace-setter Arthur Pic sat second to Rossi for the most part of their session and finished up just under six tenths adrift. He will start third on the grid, between Marciello and Vandoorne.

Sergey Sirotkin responded to a late effort from Nick Yelloly to take third in the second group, with Sergio Canamasas fifth ahead of Nobuharu Matsushita, Artem Markelov and Andre Negrao.

Barcelona sprint race winner and Monaco debutant Alex Lynn was ninth, meaning he will start just ahead of Evans, while 10th was Marco Sorensen – twice a podium finisher in FR3.5 in Monaco – who had a scary moment when he ran wide through the Swimming Pool, causing his car to take off.

UPDATE: Haryanto has been relegated to 23rd by a three-place grid penalty for failing to slow for yellow flags.