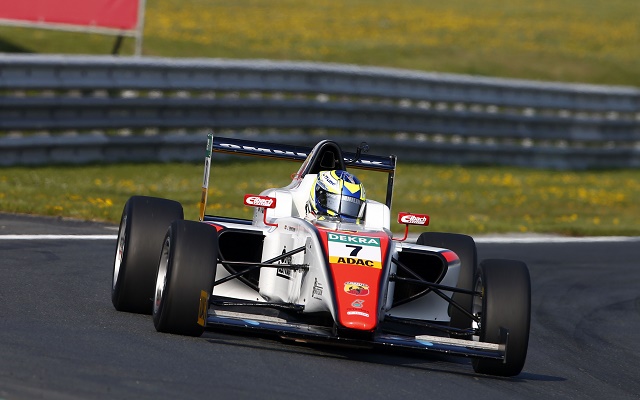 On the track where he’d taken his first and only ADAC Formel Masters win last year, Eriksson was triumphant yet again again, controlling most a race that featured three safety car appearances.

The whole podium, in fact, was made up of Formel Masters graduates, with Tim Zimmermann and Marvin Dienst joining Eriksson in the top three.

Van Amersfoort Racing’s Joseph Mawson lined up on pole, but his miserable Spielberg outing continued as he stalled off the line. He wasn’t collected by any of the cars behind him, but could only get firing when the field was already heading into turn one.

So it was Zimmermann who handily led the pack, with Ralf Aron, David Beckmann and Eriksson all entering Castrol Edge with a shot at second. Aron, then points leader, ended up punting Beckmann off under braking – and, with Job van Uitert stopping with a puncture further down the field, the safety car made its first appearance.

Up to second past Aron before the race was neutralised, Eriksson took full advantage of a slow restart from Zimmermann when the green flags flew. He was with the Neuhauser racer into turn one and then slipstreamed past him even before Remus.

For a brief few corners, it seemed the entire top five was in the fight for the lead, but Eriksson finally pulled away and, as it turned out, would not be troubled again.

With Zimmermann holding on to second, Aron defended from Dienst into Remus next time by, compromising the HTP driver, who ended up yielding fourth to Michael Waldherr.

Waldherr’s fourth then turned to a provisional podium, with the Estonian ahead of him picking up a penalty for his earlier clash with Beckmann.

By that point, Mawson had recovered to 22nd, but was then boxed in behind a car running wide and spun into the barriers as he tried to avoid a crash, leading to another safety car.

But Eriksson was not shaken by losing his lead, his masterful restart rebuilding it in mere seconds and allowing him to storm off.

The rest of the race was rather calm within the top five, albeit while Eriksson and Zimmermann settled for first and second, Waldherr was passed by Dienst and then Mattia Drudi.

The Motopark briefly struggled for pace and backed up a number of drivers, leading to a hectic fight for the rest of the points-paying positions, although he himself would take fifth.

HTP’s Janneau Esmeijer eventually emerged in sixth, right ahead of Guan Yu Zhou, who had stalled at the start but drove a superb recovery race.

An incident behind them – Thomas Preining running into Mick Schumacher in the fight for tenth and sending the German into the wall on the main straight – led to the safety car and then saw the race called off with a minute to go.

Schumacher is provisionally classified tenth, with Kim-Luis Schramm and Jonathan Cecotto bagging eighth and ninth ahead of him.