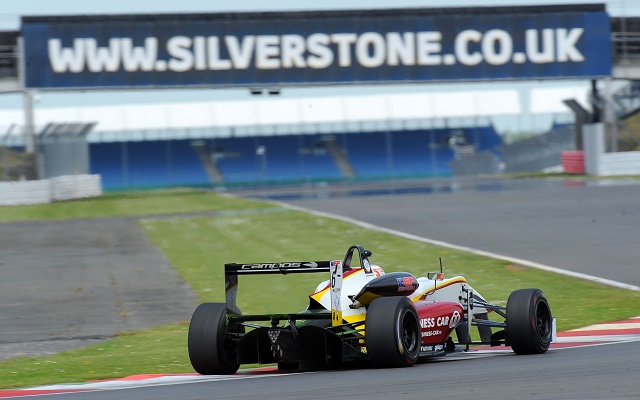 After posting his season-worst finish of seventh yesterday, the Russian rebounded to win from third on the grid.

Yu Kanamaru, Saturday’s first-time winner, was on pole but was brutally slow off the line, falling all the way down to around eighth place.

Instead, Alessio Rovera took the lead but Tereshchenko immediately tried a move on the Italian into Becketts, with both running wide. Rovera dropped to fourth but Tereshchenko kept his foot stuck in and rejoined in the lead, later to receive a warning for track limits.

That wouldn’t be the only controversial moment in the fight for the lead – as Tereshchenko’s usual rival Vitor Baptista caught up with the Russian and shadowed him in second, finally drawing alongside on lap six out of Stowe, he was forced off-track.

The pair made contact before Tereshchenko dashed towards Baptista when he rejoined, resulting in another bump.

Neither car appeared to pick up damage, but Baptista seemed shaken, subsequently letting a recovering Kanamaru into Brooklands.

The Japanese driver, by then, had pulled off a number of very bold moves to get himself back into contention and him passing Tereshchenko for the double seemed a matter of time.

But the Russian brilliantly held on over the remaining nine laps, denying any chance Kanamaru had of going for an overtake.

Behind them, Baptista and Rovera fought it out for third, the Brazilian eventually forcing the BVM driver wide and allowing Leonardo Pulcini into fourth.

Baptista went on to claim his sixth consecutive podium, with Pulcini picking up his best finish of the season and Rovera completing the top five.

West-Tec’s Tanart Sathienthirakul was sixth, ahead of Andres Saravia, Diego Menchaca and William Barbosa, with Yarin Stern recovering to tenth after early contact with Igor Walilko.