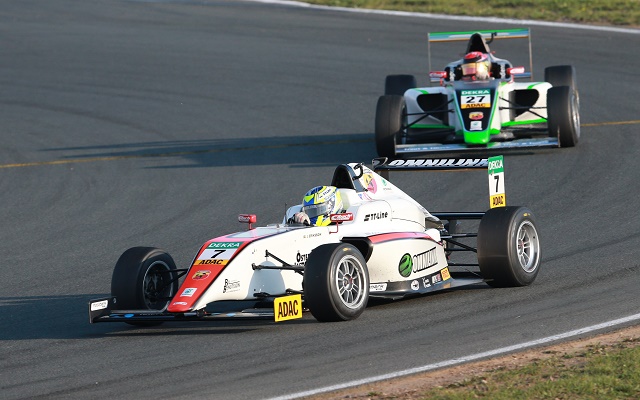 The Swede held off championship leader Marvin Dienst in an incident-filled race, with the duo themselves nearly adding to the carnage at one point.

Janneau Esmeijer held pole just as he had for race one but let the lead slip once more, slowing off the line and falling down to 10th over the opening lap.

As such, Eriksson took over in first place, with Dienst picking up second, the pairing set to put on yet another duel for the race win.

But the hectic nature of the race soon reared its head – first, Benjamin Mazatis got stuck in the gravel at Turn 1, bringing out the safety car, and just then just as the race restarted, the same fate befell Kevin Kratz.

The safety car hat-trick was completed when Kim-Luis Schramm tangled with Job van Uitert and spun around and, when the race restarted with only a few laps remaining, Dienst got a good run on Eriksson into Hasseroder.

But the Swede kept it together and ended up forcing the points lead wide on corner exit, maintaining position.

That would be as close as Dienst got to taking the lead, with Eriksson eventually bringing his car home in first place.

Mick Schumacher spent the entire race in third, but came under late pressure from a recovering Esmeijer, who had just passed Tim Zimmermann.

However, Esmeijer’s late dive into Turn 1 saw him miss the braking point and crawl through the gravel, losing all the ground he had made up.

As such, Schumacher took third – his first podium since the maiden win in the season opener – while Zimmermann held fourth.

David Beckmann, despite running well wide into Turn 1 early on, recovered to fifth, ahead of teammate Mike David Ortmann and Toni Wolf, who scored his first points of the season.

Jannes Fittje in eighth led home Benjamin Bailly, who was involved in a late incident with Jonathan Cecotto that sent the Venezuelan into the barriers with a broken suspension. The top ten was rounded out by Marek Bockmann.