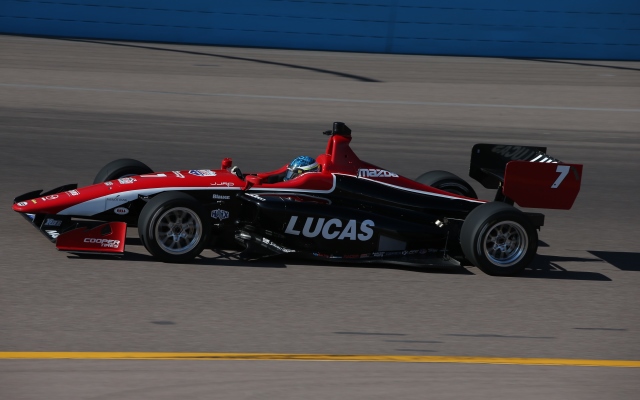 RC Enerson set the fastest time at Thursday’s Indy Lights test session at the 1-mile oval at Phoenix, with Schmidt Peterson Motorsport teammate Santiago Urrutia the head of an ever-stronger rookie class as the fastest driver in two of the three sessions.

Urrutia set the pace in the rookie test session with a best lap of 22.055 seconds, leading a Schmidt Peterson 1-2 atop the leaderboards with Negrao going second-fastest. Stoneman finished third, ahead of Carlin’s?Neil Alberico in fourth, and Korean driver?Heamin Choi fifth in another Schmidt Peterson entry, driving a session-high 49 laps.

Andretti driver?Dalton Kellett was sixth in the session,?Zachary Claman DeMelo?of Juncos Racing was seventh, Rosenqvist finished with the eighth-fastest time, and Team Pelfrey’s?Scott Hargrove?a distant ninth out of the nine rookies.

Afterwards, a two-hour morning test session which saw Enerson set the outright fastest lap time of the day, clocking in at 21.872 seconds or an average speed of 168.214 seconds. The lap was a new unofficial Indy Lights lap record around Phoenix, eleven miles per hour faster than the pole-winning lap by?Greg Moore in the 1995 Phoenix event.

The Pro Mazda champion Urrutia led the final three and a half hour afternoon test session with a best lap of 21.986 seconds, making him and Enerson the only drivers to break through the sub-22 second threshhold on the day.

Negrao continued his surprisingly strong form by finishing the final session in second, ahead of Serrales, Stoneman, and Kaiser completing the top five. Enerson was only sixth-fastest in the last session, still ahead of Jones, Blackstock, Choi, and Alberico.

Hargrove failed to set a time in the final session, but all sixteen drivers got under the 23-second mark during the day. Negrao completed 232 laps over three sessions to lead all drivers in laps completed in Thursday’s tests.