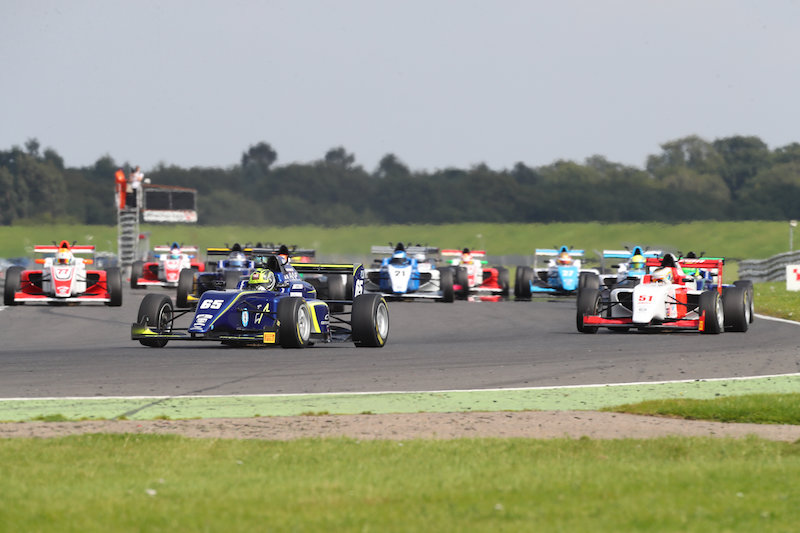 Enaam Ahmed took a step closer to wrapping up the BRDC British Formula 3 Championship at Snetterton this weekend by holding off Toby Sowery to win race one.

Ahmed beat Sowery by 0.339 seconds in qualifying to claim pole position, and in the race he led by 1.4 seconds at the end of lap one.

Sowery then gradually reduced this to just over half a second by the end of lap six, but Ahmed was able to hold the gap there and then increase it on the 10th and final tour to 0.942s.

“I got a really good start but track conditions had changed a bit so I was struggling with my car a little bit and I felt really loose,” Ahmed said.

“Toby was catching me and it was really hard to be able to up my pace because I was really struggling, but I adapted my driving style a little bit to the conditions I had and the car I had and I was able to keep the gap and win the race.”

With closest rival James Pull finishing third for his 13th podium of the year, Ahmed is now 117 points clear at the top of the standings and would put the title beyond doubt in Sunday’s race two if he can outscore Pull by 13 points.

Ben Hingeley came from seventh on the grid to finish fourth ahead of Krishnaraaj Mahadik, who qualified third in his second outing of the second with Brands Hatch but lost two places at the start.