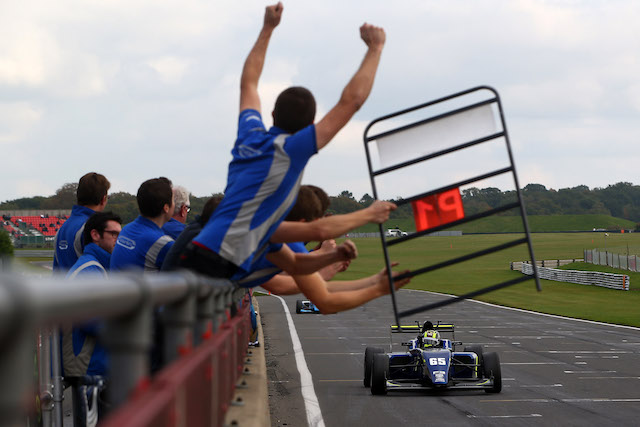 Enaam Ahmed has secured a drive with Carlin for the 2017 BRDC British Formula 3 Championship after winning the Autumn Trophy for the team at the end of last year.

The 2014 junior karting world champion won on – and led the standings after – his debut weekend in the series at Snetterton last March, but would not win again and wound?up fifth in the points.

He was however victorious back at the Norfolk circuit at the three-race Autumn Trophy in October, when he joined Carlin from Douglas Motorsport.

?I am honoured to be joining Carlin for 2017,” said the 16-year-old, who will also race in the Toyota Racing Series that starts this weekend.

“They gave me everything I needed for me to deliver at?the Autumn Trophy so I am really looking forward to working with them in the main championship as I have some unfinished business to attend to.”

Team boss Trevor Carlin added: “Enaam was a great asset and addition to the team when he joined us for the Autumn Trophy last year, which he went on to win. His attitude towards getting the job done was great, he impressed with his natural ability in the car and also with his strong race craft.

“Enaam has always been a young driver to watch since karting and even more so while we?ve been competing against him in both the MSA Formula and British Formula Three.

“We?re looking forward to working well together over the course of the season and look to replicate the success we enjoyed together in the Autumn Trophy.”

Ahmed follows James Pull in finalising a deal with Carlin for 2017 after contesting the Autumn Trophy with the team. US F4 champion Cameron Das at the event occupied the third seat at the event and has been eyeing a 2017 seat.