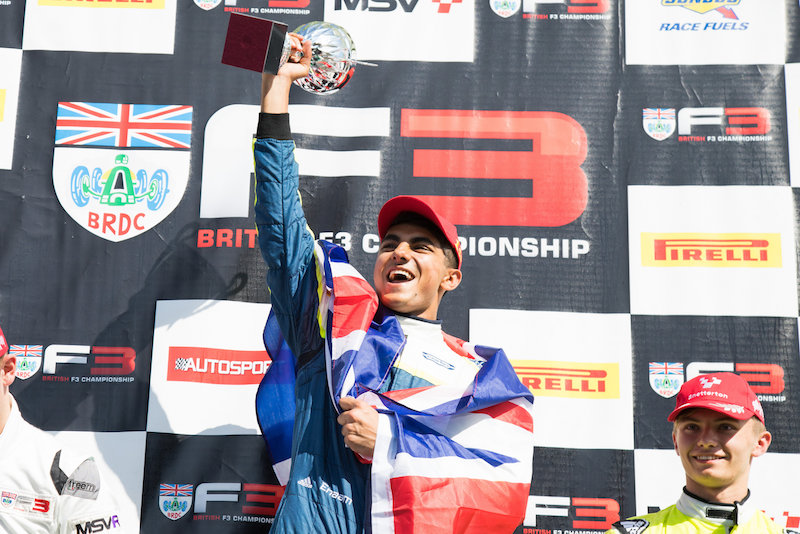 Enaam Ahmed clinched the BRDC British Formula 3 Championship crown with a round to spare by taking his 12th win of the season in race three at Snetterton.

Victory in race one of the weekend and a fifth place in race two left Ahmed only needing to finish the finale to seal the title, but he did it in style from pole position, resisting pressure from Toby Sowery throughout to take another win.

“It’s been a pretty emotional year, we’ve been working together?and working towards this for over a year,” said Ahmed.

“There’s a lot of people that have come with me on the road to this and I’m really thankful for that.

“I’d really like to say a big thanks to Trevor [Carlin] for signing me for this year and for believing in me. He thought I had the potential at the end of last year so I’m really grateful that he wanted me to drive his car.

“Where it goes from here is up to Trevor and I hope he can help me out with that.?Hopefully I can stay with them next year and stay in an F3 car in Europe.”

Jordan Cane started and finished third after his victory in the reversed-grid race two, repeating his achievement from his debut weekend in the series at the same circuit in May, when Ahmed also won the two ‘main’ races.

Cane’s Douglas Motorsport team-mate Callan O’Keeffe was close behind in fourth ahead of Krishnaraaj Mahadik and Chase Owen.

James Pull, the one driver who could stop Carlin team-mate Ahmed from winning the championship, finished in seventh, having started back in 11th.

That came after he finished 13th in race two following a first-lap clash with the other Carlin driver, Cameron Das.

Sowery has now moved ahead by two points in the fight for the championship runner-up position.