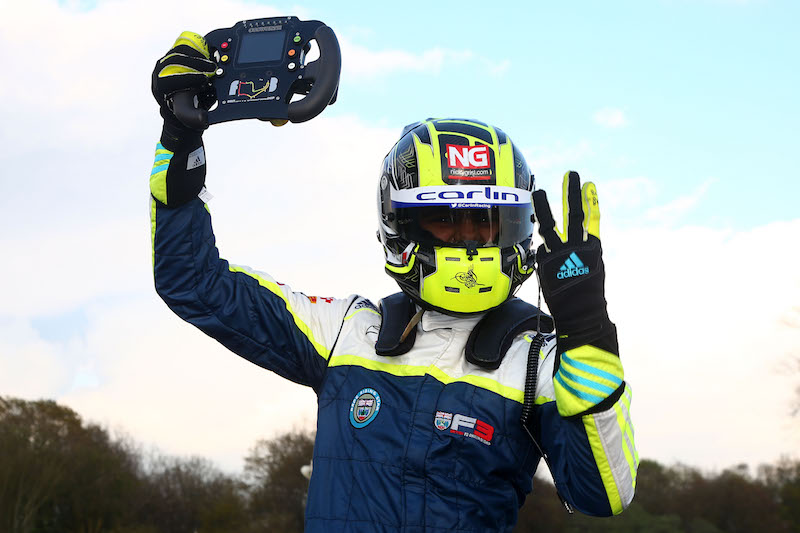 Enaam Ahmed got his BRDC British Formula 3 Championship title bid off to a perfect start with a hat-trick of wins at Oulton Park on Monday.

Series newcomer and US Formula 4 champion Cameron Das claimed pole but made a slow getaway in the wet first race, allowing Toby Sowery to lead from fellow returning race-winner Ahmed.

Initially one second behind after one lap, Ahmed gradually closed the gap to Sowery and got alongside with less than five minutes left down the inside of the first corner, Old Hall.

The pair ran side-by-side to the Cascades sweepers, where Sowery locked up and ran through the gravel, falling to third behind James Pull.

Race two was red-flagged after a first-corner incident that took Sowery, Harry Hayek, Petru Florescu and Jamie Chadwick out of contention, with the field starting on slicks on a still slightly damp track.

Callan O’Keeffe had taken the lead from a spinning Omar Ismail after the first start, but bogged down from pole on the restart, allowing Ahmed into?a lead that he extended to over seven seconds in just four laps. Ben Hingely held off O’Keeffe for second.

Ahmed’s fastest lap gave him pole for race three, but he had to deal with intense pressure from Carlin team-mate Das, who closed the gap from a second to half that, but Ahmed responded with another fastest lap and increased his lead again. Pull made it a Carlin 1-2-3.