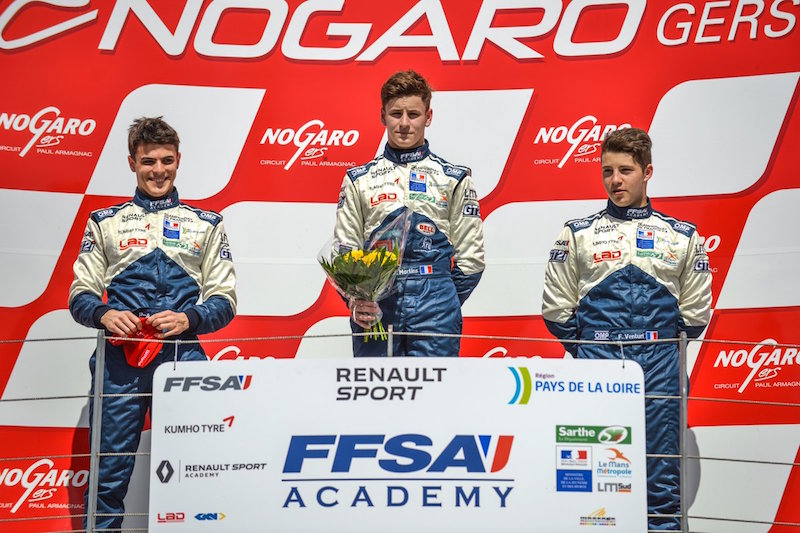 World junior karting champion?Victor Martins started his full-time move up to car racing in style with a double victory in the opening French F4 round at Nogaro.

Martins, who made a single appearance in the French F4 championship at Le Mans last year and?picked up two podiums, he started his second weekend of car racing with pole position for races 1 and 3 (set by the second and first fastest time of each driver).

The one tenth gap at the front may have not been a dominant display, but throughout the weekend he was the fastest man in every session.

In the first race he held a similar advantage over his closest rival, and had stretched out a three second lead by the end of the 15 lap encounter to secure his first win.

The man in second was Pierre-Alexandre Jean, who had qualified third and was the only person to lap regularly within a few tenths of Martins in the race.

Third place Arthur Rougier was eight seconds behind by the chequered flag and could only get within seven tenths of Martins? fastest lap.

The second race was a reversed grid encounter, with Mexican rookie Javier Gonzalez coming from second on the grid to win by an impressive three second margin. Sophomore star Hugo Chevalier equalled his career best finish of second for the sixth time, with Charles Milesi pulling off several overtakes to move from seventh to the final podium spot.

Martins made no progress from tenth on the grid, finishing 11th but with the point for fastest lap.

The grid for the final race was set from qualifying, with Martins on pole once again.

A comfortable win and fastest lap followed, with Jean repeating his second place from race 1. Florian Venturi was a close third.

The championship heads to Monza for its second round, with Martins heading Jean and Milesi in the standings.