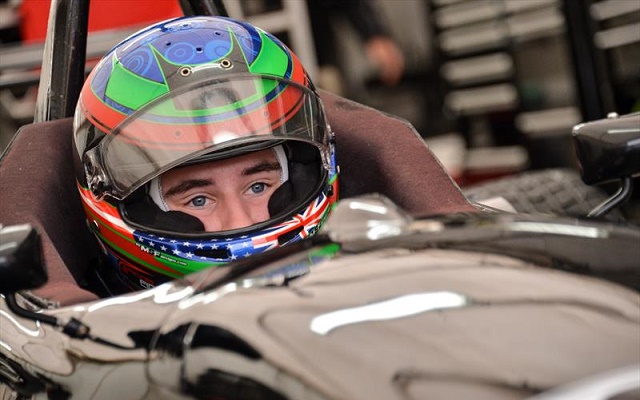 Pabst Racing’s Jake Eidson converted his pole position into victory in the first race of the 2015 USF2000 season.

Eidson maintained his lead through two caution restarts in the carnage-filled 30-minute race, winning by a second over Aaron Telitz.

The first green flag period after the start lasted just a few seconds as Parker Thompson locked up into turn one, causing a pileup that took three other cars out of the race.

Anthony Martin made it up from fifth to third before the yellow flags but was swiftly passed by Nico Jamin when the race restarted ten minutes later.

Leader Eidson started to build up a gap over Telitz but was back to square one when an incident between Max Hanratty and Augie Lerch kicked off another full-course caution.

The track went back to green with just five minutes left on the clock and Eidson controlled the remainder of the race.

Telitz took second, ahead of Jamin and Martin.

Victor Franzoni charged his way from the back to the field, having been excluded from qualifying due to failing tech inspection. He eventually had to settle for sixth sixth as he could not find a way past Chinese rookie Yufeng Luo.

Ayla Agren snuck up to sixth during the opening lap carnage, but was passed by Franzoni, F1600 rival Garth Rickards and a recovering Jordan Lloyd, ending up ninth.