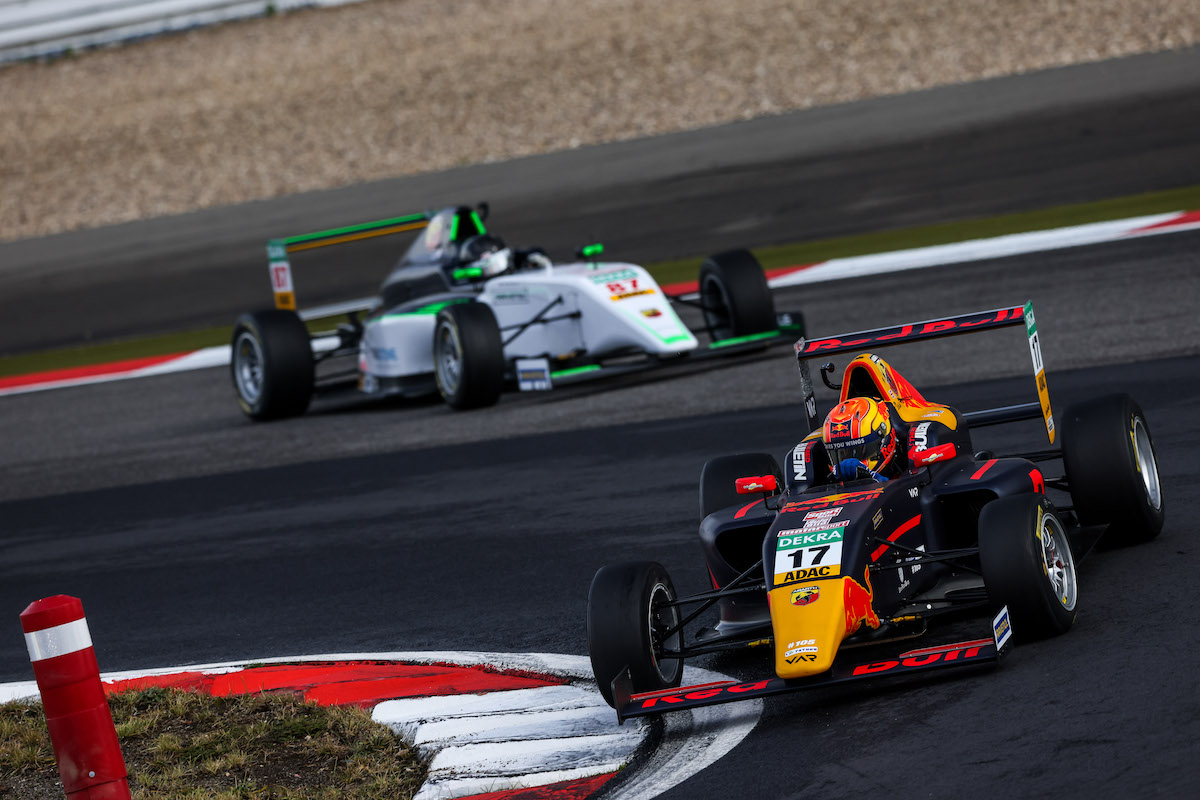 Jonny Edgar recovered from an opening lap incident to win the second ADAC Formula 4 race of the Nurburgring 24 Hours weekend in mixed conditions.

Heavy rain at the start of the race meant the race would begin behind the safety car, but the track turned green with 25 minutes left on the clock.

Edgar got a good start, having slowed the field down to a crawling pace before pulling away, but second-placed Ollie Bearman stuck with the race leader. The pair made slight contact on the opening lap, dropping them both backwards and allowing Victor Bernier to come through into the race lead.

While the rain had eased up a little, it was still very wet on track and the conditions caught out a number of drivers, including Bernier.

As he led the race, Bernier ran straight on at the first corner, going into the gravel trap. He managed to keep going but plummeted down the order.

Edgar had dropped back to third after his own incident but quickly passed Elias Seppanen back into second. The Red Bull junior was then promoted into the race lead after Bernier’s off. With clean air ahead of him, and no spray, Edgar pulled a gap from the rest of the field, and was almost two seconds ahead with Bearman following him past Seppanen into second.

Edgar continued to extend his lead over the rest of the field as Seppanen kept the pressure on Bearman. He had a gap of over three seconds by the time Seppanen was able to get back ahead of Bearman, as Bearman ran wide in the closing stages of the race.

Once ahead, Seppanen began to close the gap, but ran out of laps before he could challenge Edgar, finishing 1.103s back.

Bearman took third ahead of Jak Crawford, who had spent the race climbing back up through the field.

Crawford and Francesco Pizzi had stuck together throughout the race. In the early stages, the team-mates had battled between one another, but switched to working together as they pushed their way forward.

Crawford managed to snatch fourth from Artem Lobaneko in the second half of the race. While Lobanenko defended well, he couldn’t stop Pizzi following his team-mate through, and dropped back behind Tim Tramnitz by the end of the race.

Tramnitz kept the pressure on Pizzi, allowing Crawford to pull away. Pizzi managed to keep Tramnitz behind him until the final lap, when the US Racing driver pipped him for fifth.