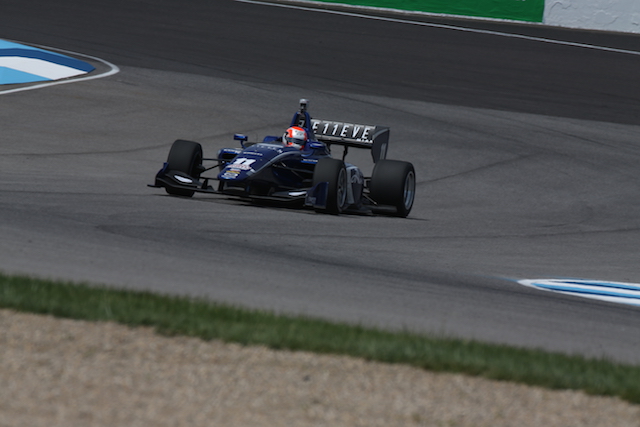 Jones’ fastest lap of?1:14.674 was over four-tenths faster than the previous record, held by Jack Harvey. The top four drivers on the grid, all of whom have won races this season, all went faster than Harvey’s lap record from 2015 qualifying.

Sharing the front row with Jones is top rookie?Felix Rosenqvist, who qualified second in his very first race at the Brickyard for Belardi Auto Racing.

Fellow rookie?Santiago Urrutia, who won the most recent race at Barber Motorsports Park, qualified third for Schmidt Peterson Motorsports, and he’ll start on row two next to?Felix Serralles in the second Carlin car.

American drivers?RC Enerson and?Kyle Kaiser will make up the third row for SPM and Juncos Racing, respectively, putting all five race winners in 2016 in the first three rows.

Dean Stoneman?will start his very first race at Indianapolis in seventh, edging out?Zach Veach in eighth, with?Scott Anderson?in a solid ninth place on the grid ahead of the third Carlin entry of rookie?Neil Alberico.