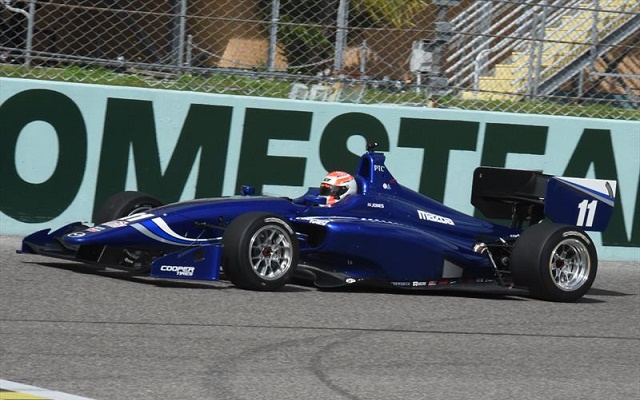 Carlin Racing’s Ed Jones enjoyed a comfortable drive from pole to victory in his and his team’s first race in Indy Lights.

Sharing the front row with teammate Max Chilton, Jones immediately pulled away to a big lead while the Brit bogged down, tumbling to fifth.

Belardi’s Felix Serralles then caught up to Chilton and, as the Puerto Rican tried to pass the Carlin driver in turn four, the pair made contact and were both eliminated from the race.

“I was ahead of him into turn two and had to take avoiding action to take the kerb,” insisted Chilton after the incident.

But Serralles saw it differently: “Chilton obviously wasn’t very quick, I made a pass into the braking zone, but he just didn’t give up, climbed over the kerb and sent me into the wall.”

Jones pulled away again at the restart while, further down the field, Andretti’s Matthew Brabham bumped into RC Enerson, sending him off-track and earning a drive-through.

Despite the leader’s quick restart, Jack Harvey managed to briefly get within half a second of Jones, only for the Emirati to ramp up the pace and storm off into the distance.

1.5s in the clear by the halfway point, Jones doubled his lead by lap 20 and took the checkered flag 3.7s ahead of Harvey.

“It’s an amazing feeling,” Jones said post-race. “The team throughout the weekend haven’t done anything wrong. The car’s been perfect for the race.”

“It was a bit tricky towards the end as the rear tyres went off. I had a massive moment at one stage, thought it was over and that I was in the wall, but I managed to keep hold of it.”

Enerson ended up ninth while Shelby Blackstock was a lap down in tenth, having been caught up in the lap two incident.