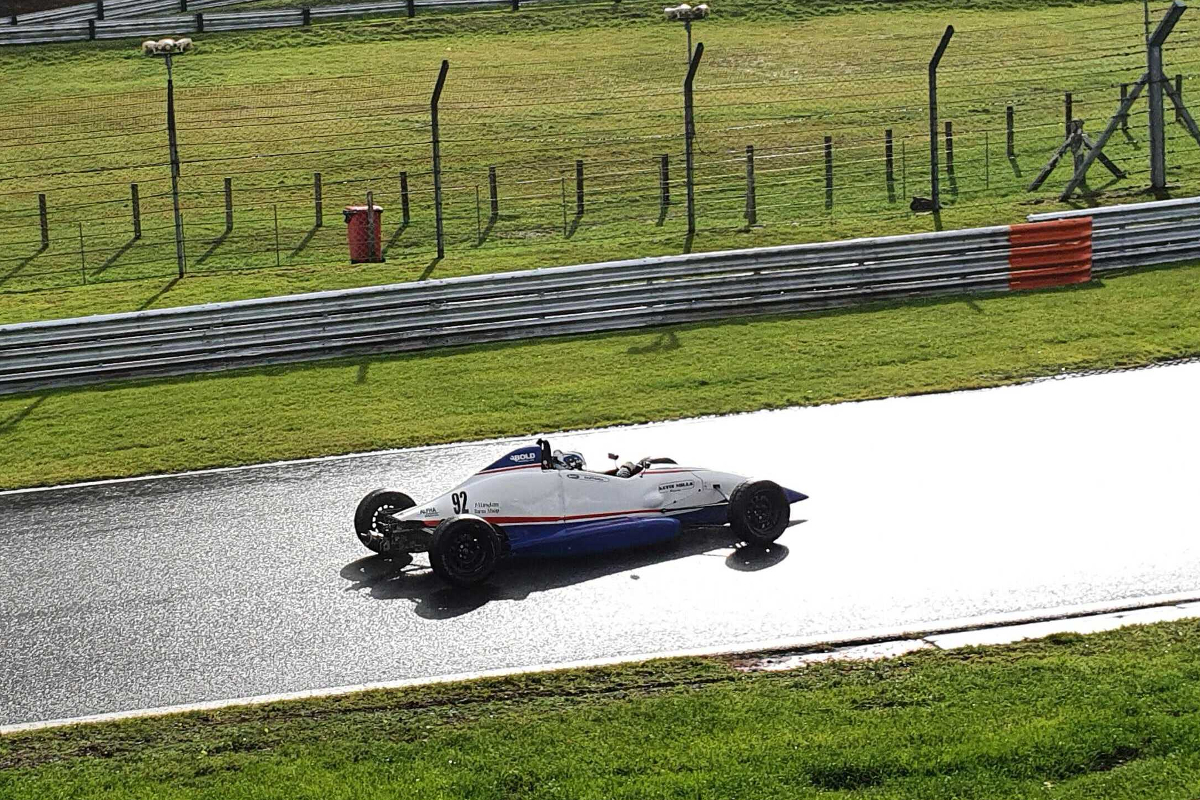 Kevin Mills Racing’s Michael Eastwell came from eighth on the grid to win a slightly shortened second semi-final at the Formula Ford Festival.

Eastwell held off Team Dolan’s Chris Middlehurst by 0.163 seconds, with the race ended one lap early due to a number of cars in the gravel around the circuit.

Semi-final one victor Max Esterson therefore is due to start from pole in the final, with Eastwell alongside him.

David McCullough lined up on pole for semi-final two, but suffered wheelspin off the line and dropped to third.

But before the opening lap was complete, Rashid spun at McLaren and hit the barriers as rain started to come down, the American pulling into the pits to retire.

That put McCullough back in the lead from Ahmed and Middlehurst, while Eastwell gained four places to fourth. The order of the top four stayed the same in the early laps, with Jeremy Fairbairn and Jordan Kelly following close behind in fifth in sixth.

Middlehurst tried to challenge Ahmed for second at Druids on lap five, but ran wide and lost third to Eastwell, while behind them Team Dolan’s Kelly pulled off the circuit before Graham Hill Bend and retired.

The safety car was deployed two laps later, with Adam Fathers having crashed out at Paddock Hill Bend, losing his rear-right wheel.

Eastwell moved up the inside of Ahmed for second when the race restarted on lap nine, with Ahmed then running wide and spinning on the greasy surface, dropping him well down the field.

After getting a good run through McLaren, Eastwell swept past McCullough into the lead at Clearways on lap 10, with Middlehurst following him through into second.

Middlehurst kept the pressure on Eastwell until the chequered flag was waved a lap early, with Oliver Chapman beached in the gravel at Druids and Sam Street having also retired.

McCullough was half a second behind the leaders in third, with Oldfield Motorsport’s Brandon McCaughan fourth. Fairbairn and Davidson were close behind in fifth and sixth. Robbie Parks was seventh ahead of Wallace Martins and Ben Cox.

Tom Nippers was 11th ahead of Ben Miloudi, but Tom McCarthur narrowly missed out on an automatic final berth in 13th.

B-M Racing’s Megan Gilkes climbed from 28th on the grid to 16th, but will have to make it through the Last Chance Race in order to make the Final. Ahmed finished in 25th after receiving a 10s time penalty.