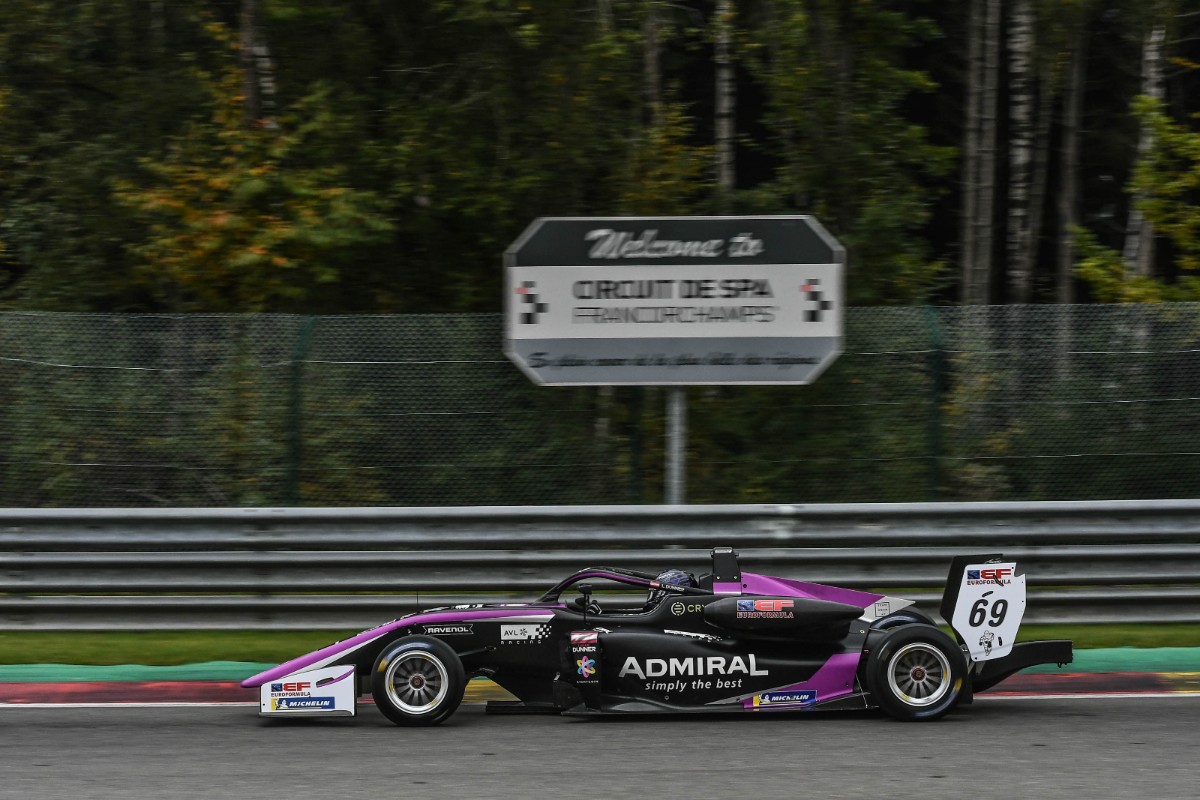 Lukas Dunner claimed his fourth pole of the Euroformula season in a split first qualifying session at Spa-Francorchamps that ended in a one-lap shootout.

The start of the session was without too much drama, although some drivers were engaging in wheel-to-wheel action or driving excessively slowly in pursuit of a slipstream, and it was Carlin’s Zane Maloney who set the early pace from Van Amersfoort Racing’s Sebastian Estner.

Going into the session’s second half, CryptoTower Racing Team’s Rui Andrade took over at the top ahead of Motopark’s Manuel Maldonado and Double R Racing debutant Louis Foster, and further improvements from Foster put him on provisional pole with five minutes to go – with his run of flying laps doubling the mileage he recorded across free practice.

Maldonado then went fastest ahead of Carlin’s Ido Cohen, before the Venezuelan had his best lap deleted and he fell down the order. Points leader Yifei Ye was the only driver able to beat Cohen’s benchmark with his next lap, and nobody else had an opportunity to improve after as the session was red flagged.

Matthias Luethen, making his series debut with Drivex School after several free practice appearances this year, span out of No Name and it meant qualifying had to be stopped so the German could be towed off-circuit.

With just over three minutes left on the clock, the decision was made to restart the session and leave drivers with one more chance to improve on their laps.

CryptoTower’s Ye was first to complete a lap after the interruption and he improved on his provisional pole lap by half a second to set a 2m09.578s. Maloney got close to it a few seconds after, before Dunner utilised a slipstream further back in the pack of cars to beat team-mate Ye to pole by 0.045s.

Maloney and VAR’s Andreas Estner ended up third and fourth fastest, before their best laps were deleted for track limits violations. This left Motopark’s Cameron Das and Niklas Krutten filling the second row of the grid, with Krutten having not even set a truly representative lap prior to the red flag.

Sebastian Estner was faster than Krutten but also had his best lap deleted, meaning Double R’s other debutant Benjamin Pedersen made the top five.

The older of the two Estners only dropped to sixth thanks to a strong second-best lap, ahead of Drivex’s Glenn van Berlo, Cohen, Maloney, Andrade and Foster.