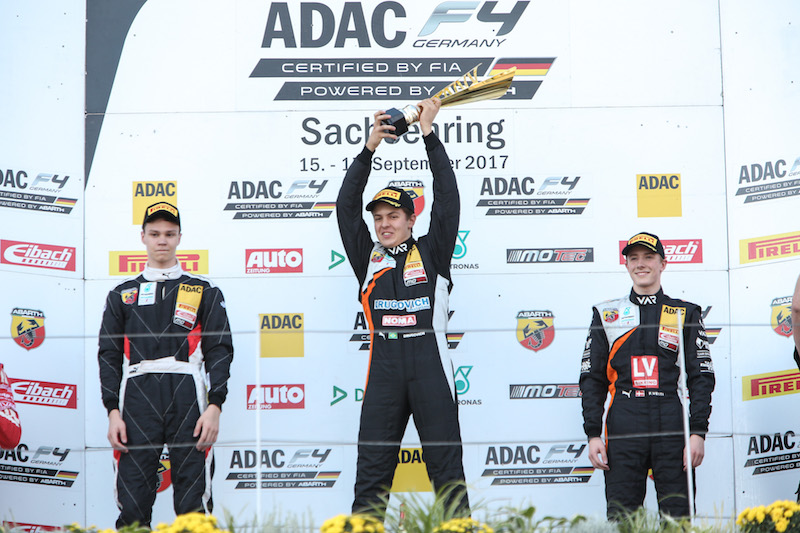 Felipe Drugovich kept his ADAC Formula 4 title hopes alive by getting to the front of a Van Amersfoort Racing 1-2-3 in the final race at the Sachsenring.

Drugovich heads to the final round at Hockenheim next weekend with a 21.5-point deficit to Marcus Armstrong, who has a 1.5-point lead over Prema team-mate Juri Vips after they finished sixth and fourth respectively.

VAR held the top three positions from the start, where US Racing driver Kim-Luis Schramm was slow away from second on the reversed-grid.

Pole-sitter Artem Petrov retained the lead on his first outing with VAR ahead of Frederik Vesti and Drugovich, who then grabbed second from Vesti at the restart following an early safety car period after race one winner Julian Hanses was spun out in the pack.

There was another safety car period in the middle of the race before Drugovich dived inside Petrov at the first corner, and then pulled open a two-second gap on his way to his fifth win of the season.

Vips passed Florsch for fourth on the first lap and was on course at that stage to move half a point back ahead of Armstrong, before his rival later put a move on Nicklas Nielsen for sixth.

Armstrong then made a move on Florsch into Turn 1 with only four minutes, but as both cars ran deep, Fabio Scherer nipped inside both to take fifth.

After losing out, Florsch held off Mucke team-mate Lirim Zendeli for seventh with Nielsen and David Malukas rounding out the top 10.