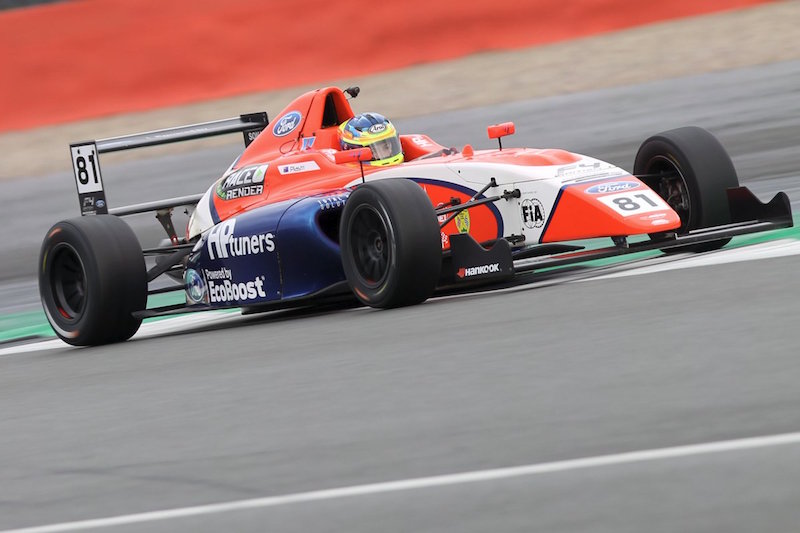 Oscar Piastri kept the British Formula 4 title race alive to the last round by winning the final race at Silverstone ahead of series leader Jamie Caroline and some dramatic action behind.

Alex Quinn slotted into second, but the race one winner immediately came under pressure from Caroline, who would end up 3.751 seconds behind the winner.

Quinn occupied third place for less than two seconds as he was rear-ended by Ericsson on the run to Maggots. Ericcson?s car was launched up into the air during the collision, but thankfully he came away uninjured and just a bit sore.

Hoggard, who has only competed in two rounds prior to Silverstone, immediately started to attack Sargeant around the outside of Brooklands.

The Fortec rookie pulled off the move on the sixth attempt, and Sargeant was shuffled back into a pack led by Pasma, who had made a double move on Simmons and Quinn two laps before.

Pasma lined up his move on Sargeant a lap later, but failed to notice an opportunistic Oliver York, who overtook them both with the help of a bit of bump drafting down the Wellington Straight.

Sargeant lost another place to Pasma, and when his Carlin team-mate boxed him in at Brooklands a lap later he fell to seventh behind Simmons.

York chased down Fortec team-mate Hoggard and?eventually pulled off a move, drifting round the outside of Hoggard at Brooklands to take third place.

During this time Pasma was handed a time penalty for abusing track limits, and when he made it to Hoggard he attempted an over-optimistic pass out of Becketts and span off.

This damaged Hoggard?s car, and it meant he dropped a position to Simmons. Simmons also had a time penalty, and when team-mate York retired with a suspected ECU problem, Hoggard was promoted back up to a well deserved third.

?I’ve had a lot of bad luck this season so for something to finally go my way is a really big confidence boost,? Hoggard explained after the race.

Sargeant finished fourth, with Linus Lundqvist completing the top five. Lundqvist had started last thanks to a qualifying crash, and his numerous overtakes at Copse meant he was well into the top ten before the incidents and penalties incurred.

Simmons finished sixth once his penalty was applied, ahead of Karl Massaad, Olli Caldwell, Sam Smelt and Manuel Sulaiman.