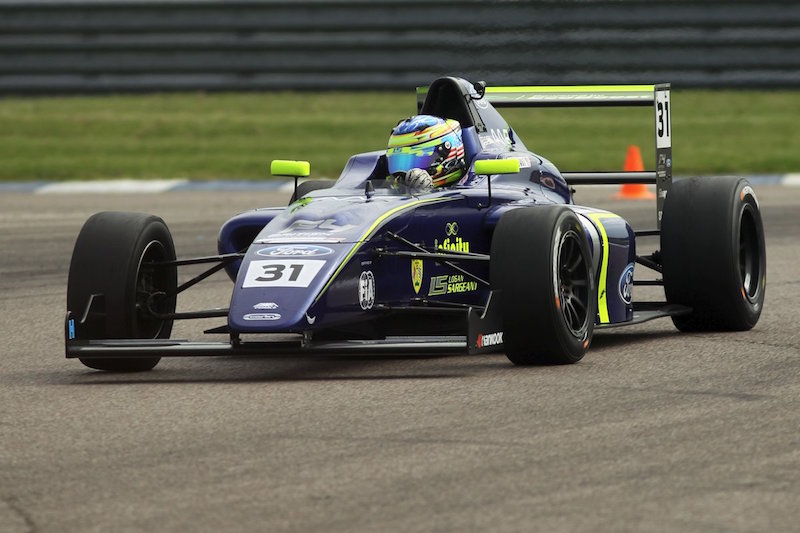 Logan Sargeant fended off Jamie Caroline to take his second British Formula 4 win in race two at Silverstone, with the latter extending his championship lead.

The reversed grid format meant that Jonathan Hoggard started from pole, but a poor start immediately dropped him back. Caroline was the one to benefit the most, using the grippier side of the track to go round the outside of Copse for the lead from fifth on the grid.

Linus Lundqvist initially looked to have second, but it was Caroline?s Carlin team-mate Sargeant who kept his starting position.

Caroline seemed to have the race under control, but a mistake on the sixth lap allowed Sargeant to get a slipstream down the Wellington Straight and take the lead around the outside at Brooklands, despite Caroline?s tough defence.

A misjudged move at Brooklands meant that Lundqvist and Hoggard fell from third and fourth, and championship contender Oscar Piastri was gifted third.

The Australian chased the top two but was never close enough to pressure Caroline into a mistake, and the trio crossed the line covered by 1.4 seconds.

?The Carlin boys put together a great car,? race winner Sargeant said after the race.

?I had a tough start. The inside of the track was quite slippery so I got a lot of wheelspin and fell back to fourth.

?I managed to get back up to second, Jamie made a mistake and I capitalised on that. I got in his slipstream and was able to pass him round the outside of Brooklands.

?It was really close but it was a fair move.?

Hampus Ericsson?s early defence against Ayrton Simmons and Oliver York proved worthwhile as once they dropped back he was unopposed in fourth, and took his eighth Challenge Cup victory in the process.

Race 1 winner Alex Quinn span off on lap one, but managed to race back up to 11th by the end of the race thanks to a time penalty for Jamie Sharp.

Harry Dyson finished 12th in his second ever F4 race, with Hoggard being the only retirement after his crash with Lundqvist.