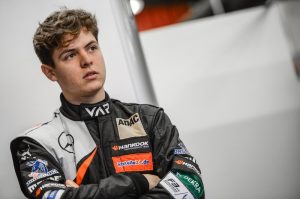 Felipe Drugovich doubled up with his second MRF Challenge win of the day in Bahrain, as Presley Martono pipped Manuel Maldonado to second in a photo finish.

Maldonado and Alex Karkosik jumped past reversed grid pole-sitter Julien Falchero at the start of the race, leaving the Frenchman to battle with Drugovich for the final step of the podium.

Having found a way past Falchero, Drugovich set about closing the gap to Maldonado in the second half of the race. The Brazilian made his move at the start of the final lap, sweeping past Maldonado and pulling away before he could fight back.

Maldonado spent the final lap of the race defending against Martono, who had passed Falchero at the end of the main straight two laps earlier. Martono ran side by side with Maldonado for a number of corners before Maldonado managed to put his car firmly ahead.

Martono waited until the final moments of the race to pull alongside Maldonado again. The pair crossed the finish line side by side, with Martono taking the position by just a hundredth of a second.

Falchero finished fourth ahead of the battling Rinus VeeKay and Robert Megennis. VeeKay’s race one retirement meant he started the second race from 16th, but was already up to 11th by the end of lap one. He made rapid progress up the order in the 10 lap race, and set the fastest lap in the process.

Michelangelo Amendola spent most of the race trying to keep Dylan Young behind him. The Belgian put up a good defence, but MRF Challenge regular Young snatched the place after a tough battle. He finished eighth, nine seconds behind Pavan Ravishankar.

There was drama early in the race when Henning Enqvist made contact with Danial Frost. Frost was sent into a spin, causing more contact behind him as other drivers tried to avoid the car. Harri Jones and Richard Wagner were also caught up in the incident. All drivers managed to finish the race, with Frost battling back to 10th.

Alex Karkosik kept Maldonado under pressure in the opening laps, but a high-speed spin dropped him down to 14th just before the midpoint of the race. He managed to pick up two position before the chequered flag, crossing the line in 12th.