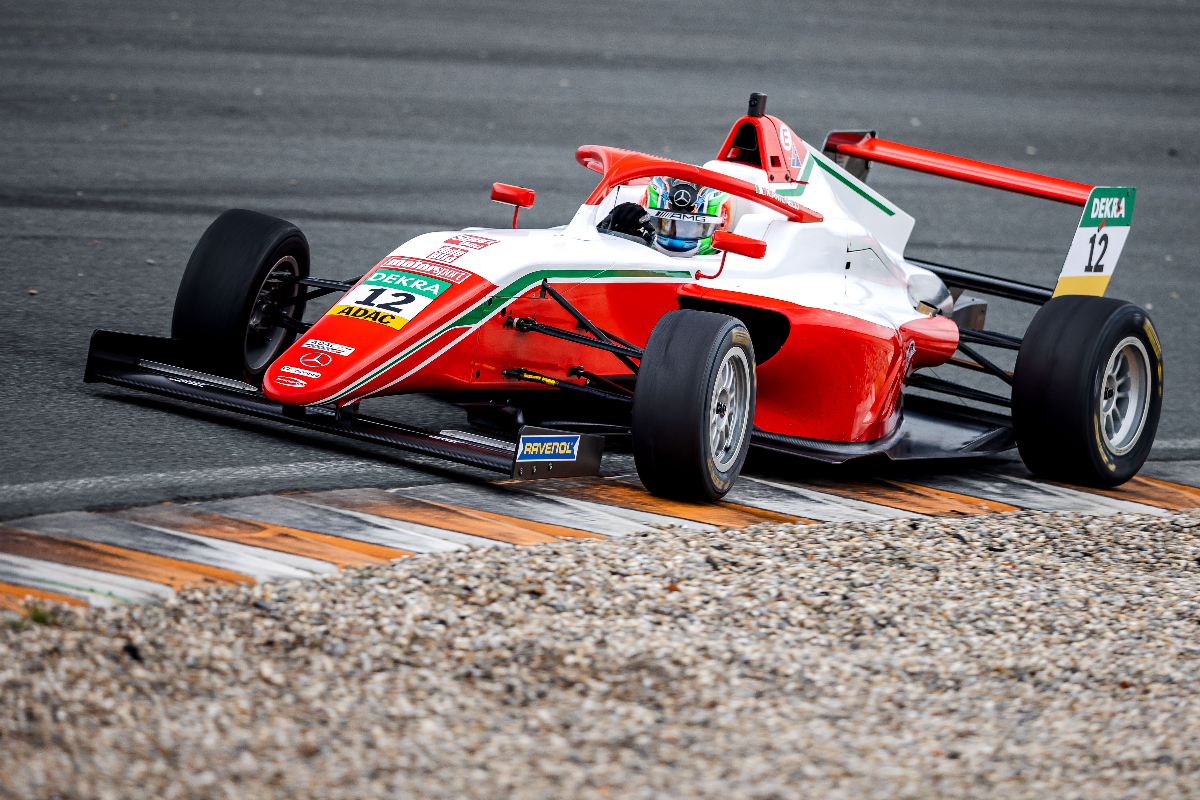 Andrea Kimi Antonelli dominated qualifying at Zandvoort to maintain his perfect record in the ADAC Formula 4 championship with his third double pole in three rounds.

Prema team-mate Rafael Camara will start alongside Antonelli in races one and two although the Ferrari junior never looked capable of challenging for pole position.

The team took a 1-2-3-4 in both sessions with Van Amerfoort Racing’s Martinius Stenshorne and PHM Racing’s Nikita Bedrin taking turns as ‘best of the rest’ in fifth.

With the first spots of rain beginning to fall, all the drivers took to the track on slick tyres for Q1. However, the red flag was required after just two-and-a-half minutes as the first car on track, VAR’s Arias Deukmedjian, speared into the gravel at Tarzan.

As the rain intensified, the teams took advantage of the stoppage to fit grooved tyres; however, within a few laps the conditions had improved enough for the drivers to dive back into the pits to switch back to slicks.

The times soon began to fall rapidly as the track dried, with Antonelli, PHM Racing’s Taylor Barnard and Prema’s James Wharton immediately setting best sector times. Bedrin jumped briefly to the top before Antonelli reasserted himself at the front.

Antonelli timed his final run to perfection, going faastest in all three sectors to take pole for race one with a 1m36.456s lap, just over half a second clear of team-mate Camara.

Wharton and Laursen ensured a Prema clean sweep of the front two rows on the grid, although the Italian team’s fifth entry, Charlie Wurz could only qualify 10th, having stayed out on grooved tyres for a lap longer than his team-mates.

After a strong showing in Friday’s free practice sessions, the PHM Racing pair of Bedrin and Barnard were a disappointing eighth and ninth, although team-mate Valentin Kluss was a promising 10th in only his third event in cars.

After a brief delay, Q2 started in the dry with Bedrin setting the early pace. However, the Prema quintet were soon into their strides, Antonelli going top with seven minutes remaining.

Although Camara was able to move briefly to the front, Antonelli was in the process of setting the fastest time of the weekend. Three fastest sector times made him the only driver to break into the 1m35s, and he was over half a second clear of Wharton in second.

Though Camara was able to improve to a 1m36.084s, he was unable to come close on Antonelli, who for good measure went faster still to end Q2 on 1m35.761s, over three-tenths clear of his pursuers.

A late improvement had Wurz edge ahead of Wharton for third on the grid. Bedrin and Barnard looked more comfortable too, locking out row three and be the best non-Premas.

Brando Badoer had a much stronger session to head the VAR runners in eighth, just behind the fifth Prema entry of Laursen. VAR team-mates Stenshorne, Emmo Fittipaldi and Deukmedjian will start race two just behind Badoer in ninth, 10th and 11th.