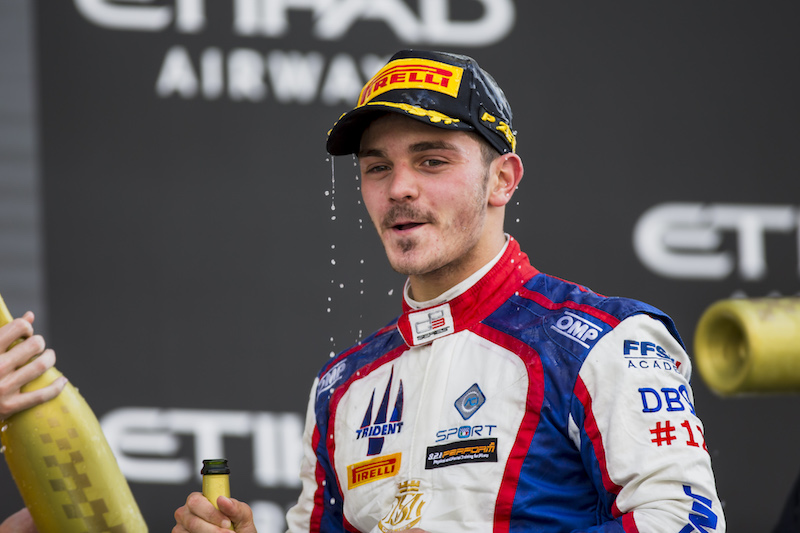 Dorian Boccolacci will return to the Formula 2 grid at Silverstone with Trident after missing the last round in Austria.

Boccolacci began the season with Campos Racing but funding issues meant that he was replaced at the team by Arjun Maini and had to sit out the Red Bull Ring weekend.

At Trident he’ll team up with fellow Frenchman Giuliano Alesi, taking the seat that was occupied by Ryan Tveter in Austria after Ralph Boschung had stepped aside with budget concerns of his own.

Boccolacci previously raced for Trident in GP3 in 2017, finishing sixth in the standings with a win in the last race of the year in Abu Dhabi (pictured).

“I’m elated to get back to the Team Trident family after the remarkable results we scored together in the 2017 GP3 Series,” said Boccolacci.

“There are mutual trust and respect with the team and I’m happy the conditions have been met to get back working together. I can’t wait to be back on track and secure an important result at Silverstone.”

Trident is currently bottom of the F2 teams’ standings having scored just four points – three of them by Boschung.

“We will do our best to assist our driver so that he can quickly find the right chemistry with our car and help the team to capture a prestigious result,” said team manager Giacomo Ricci.