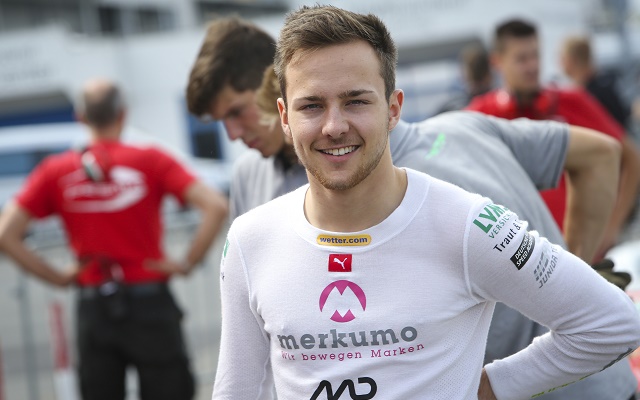 And, with erstwhile championship leader Joel Eriksson having a difficult race, the Swede was passed by Dienst in the standings.

Just as in race one, Dienst was quicker than teammate Janneau Esmeijer off the line, stealing the lead and never looking back.

The HTP duo settled into a 1-2 early on, with three orange Mucke cars battling for position behind, when the race saw the first appearance of the safety car.

Job van Uitert straightlined the NGK-Schikane, which resulted in the field getting bunched up and saw Cedric Piro pitch Benjamin Mazatis into a spin.

In the resulting bottleneck, Robin Brezina hit Toni Wolf, getting stuck on his rear wing, with both out of the race.

The race resumed after a lengthy cleanup, with Dienst once more assuming a comfortable lead.

Eriksson had made it up to an impressive fifth at that point, but a brilliant last-corner dive from David Beckmann seemingly threw the Swede off his game.

He was passed by Lando Norris shortly, then was forced wide by Mick Schumacher, ending up eighth.

Further down the field, Kim-Luis Schramm of Neuhauser was too optimistic heading into the chicane and spun around as he tried to pass, going into the path of Michael Waldherr and breaking the Motopark machine’s suspension.

A short safety car period followed and, upon restart, Dienst did enough to secure the win, with Esmeijer bringing home a Mucke 1-2.

Shwartzman claimed his seventh podium from last eight starts, followed by teammates Beckmann and Norris, and Schumacher, claiming his best win since his Oschersleben win.

Aron tumbled down to eighth on the final lap, while Joseph Mawson and Marek Bockmann both passed Eriksson in the last minutes.

As a result, the Swede now trails Dienst by three points, with Mawson a further nine down.