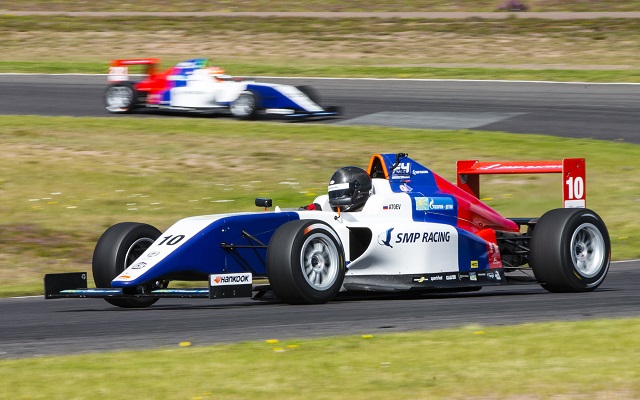 Vladimir Atoev doubled up in the second SMP F4 race at Alastaro with yet another lights-to-flag victory.

The Russian, starting from the pole, was able to stay ahead during a messy opening lap which saw several incidents.

Behind the leader, Niko Kari, Nerses Isaakyan and Enaam Ahmed were entered turn one three-wide, resulting in an unavoidable incident.

The Russian got sandwiched between the duo, first making contact with Kari on the inside line, which took both him and Ahmed out of contention. Although Ahmed was able to rejoin, he could not finish the race due to undertray damage.

Later on, when the safety car was brought out and bunched up the field on the main straight, Nikita Troitskiy was caught out, could not slow down in time and crashed into Ivan Matveev at high speed.

As a result, the first half of the race was spent behind the safety car and, when the race resumed, Atoev and Kari cruised to the finish to repeat yesterday’s one-two.