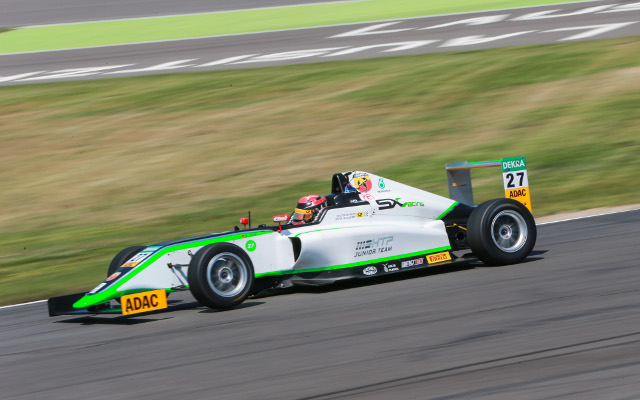 Marvin Dienst ended up victorious in the reverse-grid ADAC F4 race at Lausitzring to take his first win since the opening round of the season.

Starting from eighth, the HTP Junior driver quickly worked his way up the order as a result of several drivers hitting trouble at the start.

Pole-sitter Jason Kremer‘s car was crawling off the line and was forced to pit at the end of the opening lap, eventually finishing six laps down.

In addition, both drivers from the second row – Jonathan Cecotto and Kim-Luis Schramm – stalled and dropped down the order.

As a result, Cedric Piro, who lined up on the front row, had a comfortable lead but the safety car soon was out due to a collision between Janneau Esmeijer and Jan Jonck.

Piro lost two positions right after the restart, allowing Joseph Mawson and Robert Shwartzman into the lead with Dienst quickly following them through.

The trio then started to pull away but the race was neutalised twice more because of the beached cars of Marilyn Niederhauser and Benjamin Mazatis respectively.

Mawson held on to the lead up until the restart of the final safety car stint. At that point however, Shwartzman tried to overtake the Australian at turn one but ended up nudging him out just enough to let Dienst sneak into the lead.

As there was time for just one lap, Dienst saw the checkered flag first, followed by Mawson and Shwartzman.

Tim Zimmermann passed Mike David Ortmann on the final lap to take fourth, while Jannes Fittje repeated his best finish of sixth to be the top Motopark driver.

Starting from last as a result of his exclusion from race one, Joel Eriksson quickly fought his way up around the top ten, eventually ending up ninth, with Harrison Newey completing the top ten.

German karting graduate stars completed difficult races. David Beckmann had to serve a drive-through for overtaking behind the safety car and Mick Schumacher was forced to retire with broken suspension.