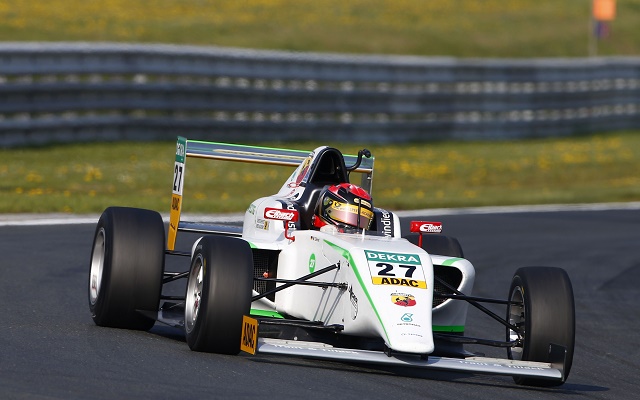 Dienst, who has raced in the championship’s predecessor ADAC Formel Masters, made a lightning getaway and survived three restarts to emerge victorious.

Teammate Janneau Esmeijer led the field off the line but, with front row starter Joseph Mawson struggling to get going, Dienst pulled up to second and even briefly challenged Esmeijer into turn one.

Both Dienst and Prema’s Ralf Aron then passed the Dutchman over the opening lap, but a turn one clash between Pirosports teammates Toni Wolff and Cedric Piro brought out the safety car.

Dienst subsequently made a solid restart, while Esmeijer noticeably struggled for pace, letting Michael Waldherr through almost immediately and then being passed by Mattia Drudi and Joel Eriksson.

Contact in the mid-pack brought out another safety car with Benjamin Mazatis of Mucke beached in the gravel. It wasn’t a long stoppage though and Dienst was speeding off into the distance in no time.

Waldherr briefly challenged Aron for second, but himself then fell prey to Drudi, with a strange off for Robert Schwartzman then forcing yet another safety car appearance.

Yet again, the restart was nailed by Dienst, but Aron had the pace to keep up and eventually was within four tenths or so of the German. However, Dienst held on to claim a milestone win.

Drudi, Italian F4’s 2014 runner-up, was third ahead of Motopark drivers Eriksson and Waldherr, the latter somehow holding off much faster Mawson in the final laps of the race.

Mick Schumacher enjoyed a solid debut in car racing, keeping out of trouble and steadily gaining positions over the course of the race. He finished ninth, ending up as the best single-seater debutant in the classification.

He was closely followed by Rotax star Thomas Preining, who was a very late signing for Mucke but ended the race as the team’s top driver.

Louis Deletraz cruises to victory in first Eurocup race of 2015