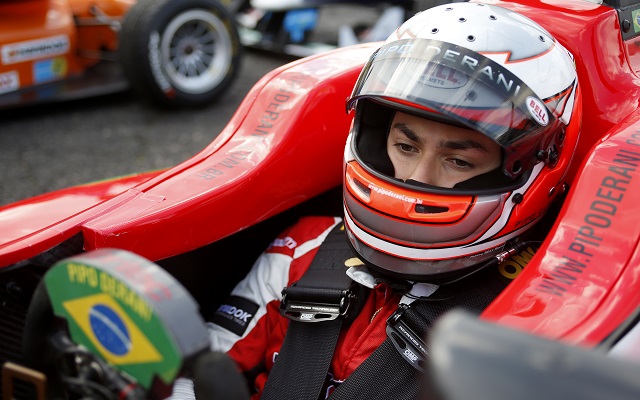 Brazilian racer Pipo Derani will be switching over to the American junior single-seater ladder, as he has been officially unveiled as a Team Pelfrey driver for the 2014 Pro Mazda Championship season.

The news were announced on the heels of Derani’s successful outing in the prestigious Macau GP event, with the Brazilian rounding out the podium of the main race.

Derani, 20, began his single-seater career in 2009, taking seventh in Formula Renault 2.0 NEC with Motopark. He had a couple of rather quiet subsequent campaigns, taking tenth in German F3 and 15th in British F3, before joining Fortec for a sophomore year in the latter category.

Derani elaborated on the reasons for the switch, stating: “I’m looking and designing my career for 20 years from now… Even if I had gone to GP2 or World Series [by Renault], it would have been difficult to ensure that I would be on the F1 grid, even if everything went well. It could be a long time and I still might not have found a seat”.

Team Pelfrey, having taken Spencer Pigot to fourth in this season of Pro Mazda, have announced two drivers so far, with Derani joined by Dalton Kellett.

“We are hugely excited and feel very privileged to have been able to put a package together for Pipo to join Team Pelfrey for the 2014 Pro Mazda Championship,” said team manager Nigel Tuckey. “We have very high expectations for Pipo as his experience and success in Euro F3 and other international arenas against very stiff competition should place him amongst the drivers to beat for the championship in 2014.”