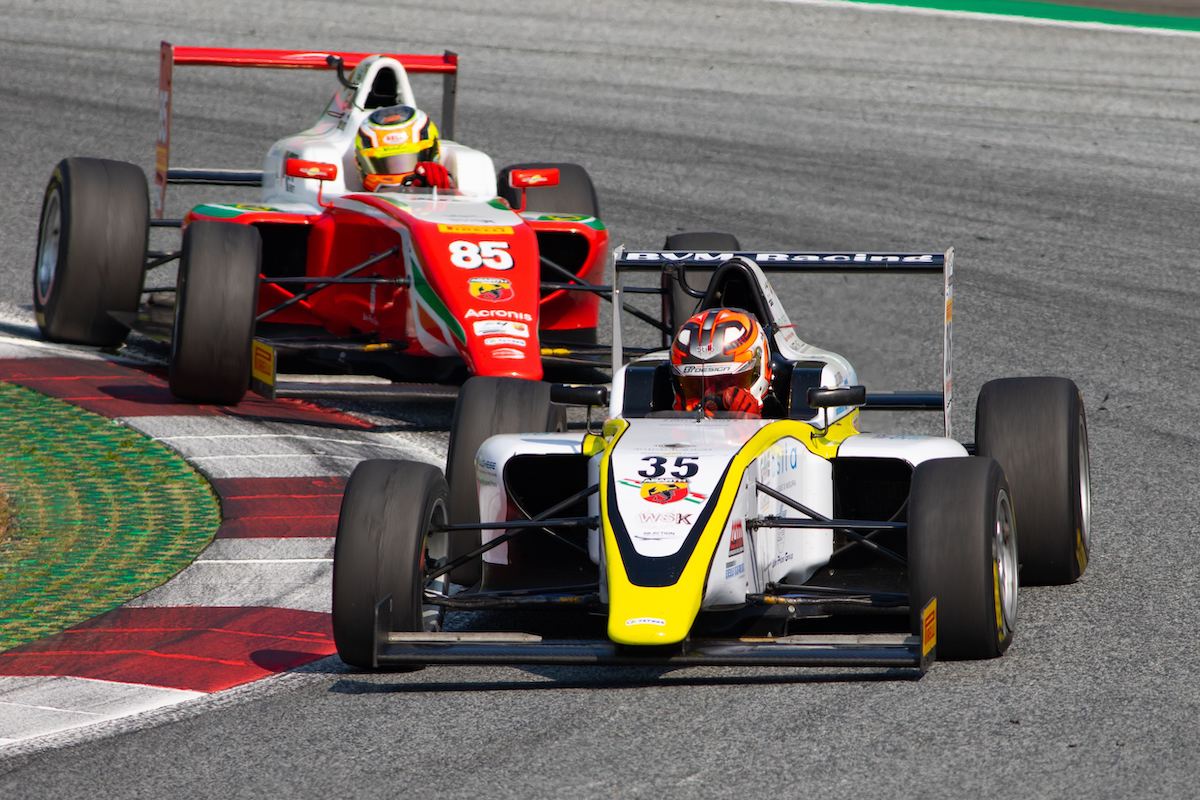 Pietro Delli Guanti took his and BVM Racing’s maiden Italian Formula 4 victory in a crazy third race at Monza, despite his engine smoking significantly as he crossed the finish line.

As they approached Turn 1 on the second lap, Rosso rear-ended Mini and took both out of the race. That left Francesco Pizzi in the lead ahead of Delli Guanti.

The pair battled with Iron Lynx’s Lorenzo Fornaroli for much of the race, as a spin for G4 Racing’s Axel Gnos brought out a late safety car.

The strength of the slipstream was as potent as expected around the fast Monza circuit, with the leader regularly weaving down the back straight to break the tow.

When the racing resumed, Prema’s Sebastian Montoya, who had kept with the leaders in fourth for much of the race, initially became a major threat. But soon after the restart, Delli Guanti displaced Pizzi on the outside of Parabolica to take the lead.

It was then two Prema drivers who started further back in the order who would challenge for the victory, with Gabriele Bortoleto and Dino Beganovic – who started from 22nd and 20th respectively – pressuring the frontrunners.

Bortoleto moved up to second and closed on Delli Guanti as the leader’s engine started to puff smoke. It smoked heavily exiting the Parabolica but he crossed the finish line narrowly ahead of Bortoleto.

Fornaroli was able to take third for his maiden podium, ahead of long-time race leader Pizzi. Jenzer’s Santiago Ramos charged late on to take fifth, ahead of Montoya and Beganovic who faded slightly towards the end.

Despite an off early in the race, Jenzer’s Filip Ugran recovered back up to eighth, ahead of Abu Dhabi Racing’s Hamda Al Qubaisi.

Jesse Salumenautio rounded out the points ahead of Bhaitech team-mate Dexter Patterson, who was running in the top six in the early stages, and AKM Motorsport’s Lorenzo Fluxa.

In addition to Mini, Rosso and Gnos failing to finish, Jenzer’s Piotr Wisnicki retired after contact with BVM’s Francesco Simonazzi on the restart. AKM’s Lorenzo Patrese failed to start the race after issues from race two.