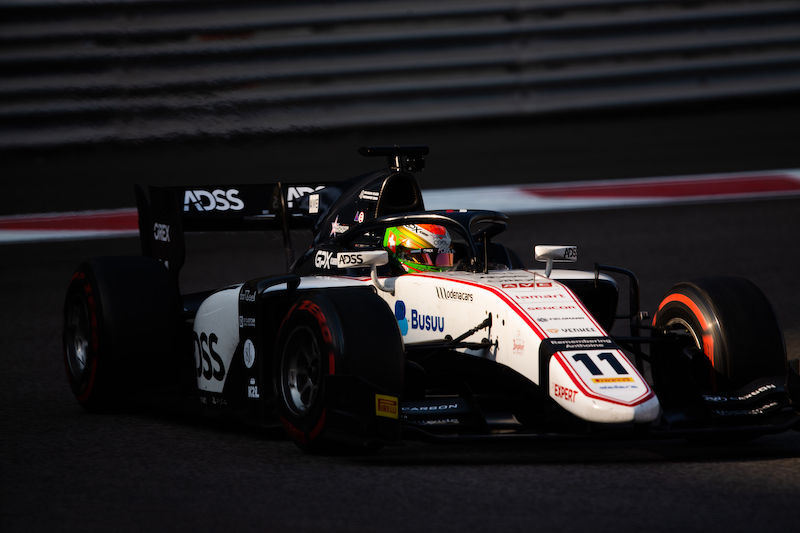 Louis Deletraz topped the times with another late effort on day two of the Formula 2 post-season test in Abu Dhabi, this time edging out FIA Formula 3 champion Robert Shwartzman.

Beaten into second place by Deletraz on Thursday, Marcus Armstrong set the pace in the morning session with a 1m50.436s lap that also stood through much of the afternoon.

Prema driver Shwartzman went top of the afternoon session at the half-way stage, before Charouz man Deletraz posted the best time so far of a 1m50.188s with half an hour remaining.

Shwartzman responded, going 0.012s faster with 18 minutes to go, but Deletraz returned to the track to set one final flyer, managing a 1m50.124s with five minutes left on the clock.

Nikita Mazepin, Pedro Piquet and Ralph Boschung were the only other drivers to go under the 1m51s mark in the afternoon; something that a total of 11 drivers had achieved in the morning.

Armstrong’s morning effort remained good enough for third overall. The ART driver had been 0.025s quicker than Deletraz and Callum Ilott, who set identical times, with Ilott finishing the day fourth for Virtuosi.

Next came Mazepin and Guanyu Zhou ahead of Boschung, who has rejoined his 2018 outfit MP Motorsport for the last two days of the test.

Drugovich narrowly outpaced Christian Lundgaard and Mick Schumacher, with the latter then sitting out the afternoon running while an issue on his Prema car was fixed.

Armstrong was slowest of those to set a time in the afternoon, 6.5s adrift of Deletraz as he focused on race simulations.